St. Thérèse of Lisieux: Trusting to the Point of Folly 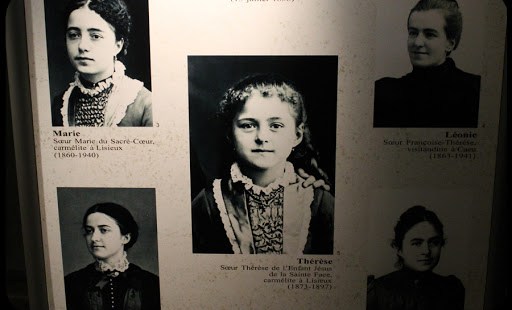 Sanctity, as Saint Thérèse of Lisieux says, is expressed most fully, not in actions or specific deeds but in a disposition of the heart that makes us little and humble in the arms of Our Father, aware of our weakness and helplessness yet trusting to the point of folly in his Fatherly love. ("In the Arms of Mary")

Sometimes it feels as if God is pushing me more and more to deeper levels of trust. It is not easy. Life can be challenging. Sometimes it seems that no matter where we look there are issues to be dealt with, battles to be fought, work to be done, but mostly, practice in the art of letting go and trusting to the point of folly.

I have a special devotion to St. Thérèse whom I was named after, because of my paternal grandfather’s huge devotion to her. I am convinced she had more than a little to do with my conversion.

My Aunt Lucy often told me how for years she prayed daily for St. Thérèse’s intercession with God to bring me back to the faith. When I did return to the faith, “The Story of a Soul” was the first spiritual book I was given to read by the priest who was giving me spiritual direction.

In the midst of confronting my sinfulness and living in darkness and despair, the simple spirituality of St. Thérèse made conversion and even holiness seem attainable. It was a  relief to hear what I already knew, that I could never do it on my own, but I needed to throw myself into our Father’s arms with trust in His love for me and He would do the rest.

She also gave me the tools to deal with the darkness that enveloped my life because of abortion. Those times when I felt immersed in a darkened well unable to see or feel anything like hope because of my grave sin, her words were more than a little comforting.

"O Jesus, Your little bird is happy to be weak and little. What would become of it if it were big? Never would it have the boldness to appear in Your presence, to fall asleep in front of You. Yes, this is still one of the weaknesses of the little bird: when it wants to fix its gaze upon the Divine Sun, and when the clouds prevent it from seeing a single ray of that Sun, in spite of itself, its little eyes close, its little head is hidden beneath its wing, and the poor little thing falls asleep, believing all the time that it is fixing its gaze upon its Dear Star. When it awakens, it doesn’t feel desolate; its little heart is at peace and it begins once again its work of love. It calls upon the angels and saints who rise like eagles before the consuming Fire, and since this is the object of the little bird’s desire the eagles take pity on it, protecting and defending it, and putting to flight at the same time the vultures who want to devour it. These vultures are the demons whom the little bird doesn’t fear, for it is not destined to be their prey but the prey of the Eagle whom it contemplates in the center of the Sun of Love."

How often I thought of that “little bird” and facing the Divine Sun in spite of what I felt! She made heaven accessible to me. She was so human. She spoke of her "little way of confidence and love," trusting in His goodness to her to the point of folly.

St. Thérèse made it possible for me to believe in healing, forgiveness, and mercy because she made me recognize, not only that I was unable to heal myself, but I did not need to. God wanted to do it because of His love for me in spite of my failing and weaknesses.

Trusting to the point of folly is a road to sanctity. A road whose only requirement is a true act of the will to trust always in the one who came to give us life!

Theresa Bonopartisis the director of the post-abortion  healing program Lumina and co-developer of the “Entering Canaan” post abortion ministry model. The Church celebrates October 1 as the feast day of St. Thérèse of the Child Jesus and the Holy Face.