This year’s Al Smith Dinner raised nearly $3 million for the needy women and children of New York. Seated at crystal-laden tables filling the burgundy and gold ballroom of the Waldorf-Astoria Hotel on Park Avenue in Manhattan, the 850 guests listened to presentations from this year’s honoree, philanthropist and Home Depot co-founder Ken Langone, guest speaker Charlie Rose, and the Archbishop of New York, Cardinal Timothy Dolan. 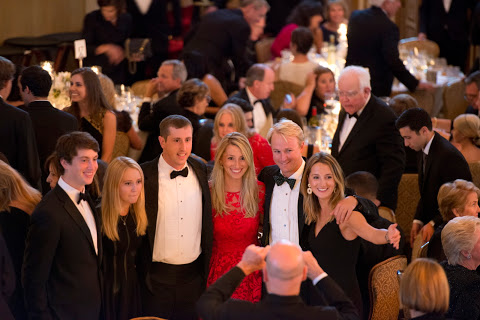 All of the proceeds of the $2,000-a-plate dinner went towards the nearly 20 grant recipients, including Catholic Big Sisters and Big Brothers, the Inner-City Scholarship Fund, and Good Counsel homes for unwed mothers. The Al Smith Foundation itself underwrote the cost of the dinner, which included king crab salad with lacquered prawns, grilled tournedo of beef with white truffle risotto fritters, and a gingered chocolate dessert with salted caramel sauce. As Alfred E. Smith, IV, chairman of the annual gala that is named for his great-grandfather, explained, "The dinner’s on us."

Cardinal Dolan presented philanthropist and Home Depot co-founder Ken Langone with this year’s Happy Warrior Award for Langone’s great contributions to New York City, including donating to the NYU Medical Center, which now bears his name, and becoming a major fundraiser for the restoration of St. Patrick’s Cathedral on Fifth Avenue. The Happy Warrior Award "recognizes individuals who epitomize the character, grace, and leadership of Governor Alfred E. Smith," the first Catholic presidential candidate, "by having a positive impact on others and the City of New York," stated the dinner program.

Franklin D. Roosevelt had called Smith the "happy warrior of the political battlefield." 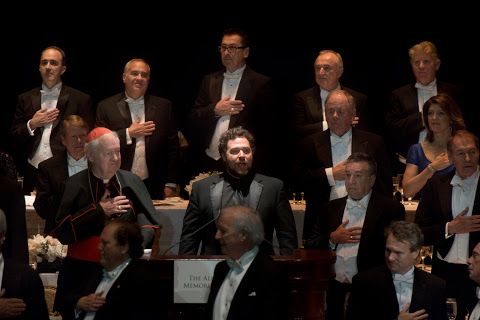 Aside from an opening prayer from Cardinal Edward Egan, Archbishop Emeritus of New York, and a moving, unaccompanied performance of the National Anthem by Metropolitan Opera tenor Bryan Hymel, the traditional roasting was in full swing.
In Langone’s acceptance speech, he quipped that, considering the mandatory 75-year-old retirement age for cardinals, Cardinal Dolan might need employment soon. Offering the cardinal a job at Home Depot, Langone presented His Eminence with a bright orange apron and then a second, much bigger one, just in case the first did not fit his girth. Poking more fun at Cardinal Dolan’s size, Langone joked, "If they ever change the rules about celibacy, I’ve got a perfect girl for you. Her name is Jenny Craig," referring to the popular weight-loss program. 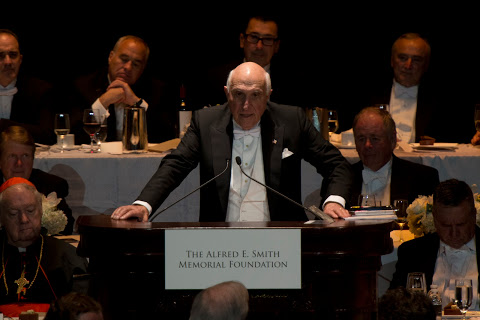 Acknowledging that his fundraising efforts on behalf of many Republican presidential candidates had not borne fruit, Langone said it just went to prove the old adage that you keep your enemies close and your friends closer, but apparently out of the White House. Then he laughingly threatened the Democrats in the audience that he would do a fundraiser for Hillary Clinton, thus ensuring her failure.

To much applause, guest speaker Charlie Rose, host of the PBS show Charlie Rose and co-anchor of CBS This Morning, stated that "the reason I came this evening was because of Cardinal Dolan. I love him." But Rose wondered why he had been invited to speak, when so many famous people had stood at the podium before him. "I don’t have the stature of Churchill, the wit of Kennedy, or the comedy of [last year’s guest speaker Stephen] Colbert. But I’m not worried. I’m a Protestant at a Catholic charity event with jokes written by Jewish writers. I’m okay."