Caring for a Child With Trisomy 18 was the Easy Part; Getting Doctors to Care Was Much Harder 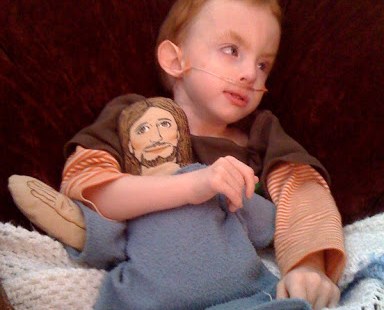 Sometimes life throws us a curve and we don’t know what to expect. Joy and expectation turn into sorrow and fear in an instant. This was true for my family when we found out at a 19-week ultrasound our unborn son had markers for a chromosomal condition called trisomy 18. We had 10 healthy children and the news came as a shock.

We went in to find out if we were having a girl or a boy and instead were told to there were no survivors beyond 2 weeks with trisomy 18 and we needed to have an amnio so we would have more choices. We refused an amnio because we didn’t want to risk hurting our son. And as for the choices they mentioned, we made it clear abortion was not an option.

We loved our baby boy and named him Peter.  After Peter was born our daughter went on the Internet and found stories of many children and some adults living with trisomy 18. When I asked the doctor why he lied to us, he told me that they had to think about resources and that Peter would never contribute to society and he would be a horrible burden to our family. My heart broke hearing these words.

A woman doctor whom I had never met before Peter was born told me she wanted to talk to me as a mother. She said that if I wanted to be a good mother I couldn’t bring Peter home. It would not be fair to my other children. The doctors’ advice was to wrap Peter up in a blanket and let him go.

Peter was a great gift and blessing to our family. He was a joy to care for and we consider him our greatest gift besides our Catholic faith. He helped us learn about unconditional love and taught us about compassion and sacrifice. We never once felt he was a burden to care for.

Many times we had to fight for and justify wanting to have Peter treated and cared for the same way our other children would be. Pressure to sign a DNR was common and ongoing. Once when Peter had pneumonia and we wanted him treated, we were asked why we wanted to put him through that.

I was once asked what the hardest part of having a child with special needs was. The hardest part by far was the cold and heartless attitude of some of the medical professionals who couldn’t see past the diagnosis of trisomy 18 to the beautiful little red- headed boy who was loved and treasured by his family.

There is an eugenic, utilitarian mentality that has invaded society and warped its thinking. To be told that your child will never contribute to society, and it would be best to let him die, is something no mother should ever be told. The truth is that these kids contribute to society in the most important way of all. They teach us how to become better, more compassionate people. They teach us how to care and how to love. They are “Teachers of Our Souls.”

Through the ministry Peter inspired called Prenatal Partners for Life, I have heard many similar sad stories. Pressure to abort a child diagnosed with special needs is common and families often have to fight to get proper treatment to help their child reach their full potential. One family we helped was told that their baby was doomed and abortion was the compassionate thing to do. Another family was denied a minor surgery to help their baby with trisomy breathe better.  “Train wreck, freak, burden” are some of the things families have been told their babies are, words parents should never have to hear. Scare tactics and intimidation are not uncommon.

I wish I could say the end of Peter’s life was better than the beginning. Peter died at age six and a half after having his appendix removed. We felt something was terribly wrong after Peter died. We were told that he died from infection caused by appendicitis and his heart couldn’t take it, but an independent autopsy we had done revealed he bled to death. We later discovered the hospital Peter died at had an internal “futility of care” policy. Many, if not all, hospitals have these policies and most of the public is not aware of them.