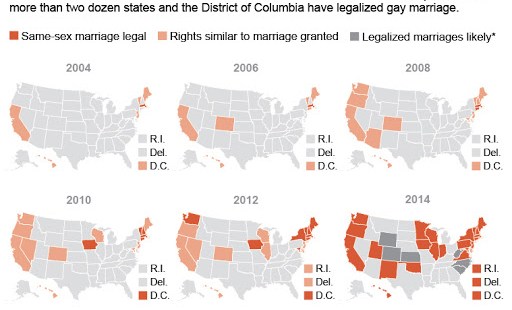 Justices make news by deciding not to rule

In the mid-2000s, voters approved bans on same-sex "marriage" in Utah, Indiana, Oklahoma, Virginia and Wisconsin by overwhelming margins. The strongest support was in Oklahoma at 76 percent and the weakest in Virginia at 57 percent.

In the last 18 months, the Fourth, Seventh, and Tenth appellate courts struck down bans in those states and in Indiana. Before the Supreme Court opened a new term, court observers wondered if the justices would side with the voters or the appeals-court judges.

On Monday, the high court revealed its answer. It sided with the judges.The rulings by the three appellate courts would not be reviewed. The high court’s decision likely means that homosexual couples who wish to receive a marriage license can get one.

The short-term effect of the Supreme Court’s decision is clear, according to court observers. The number of states that permit same-sex "marriage" is likely to jump from 19 to 30. In addition to the five states, six states—West Virginia, Colorado, Kansas, Wyoming, North Carolina and South Carolina—fall within the jurisdictions of the three appellate courts.

But what is the long-term effect of the Supreme Court’s decision on future rulings and the traditional understanding of marriage as the union of one man and one woman?

Ryan Anderson is a widely recognized conservative expert in the debate. The William E. Simon fellow at the Heritage Foundation, he co-wrote What is Marriage with Robert P. George and Sherif Gergis. Anderson spoke over the phone with Aleteia for 15 minutes.

Does the Supreme Court’s denial of review disregard the wishes of voters and their democratically elected representatives?

Unfortunately, there were a lot of people who said that Justice Kennedy’s decision in Windsor encouraged judges (to overturn state laws on same-sex marriage), even though he didn’t do this. (His decision was) half equal protection, half federalism. All he said was once states decide for same-sex marriage, the feds need to recognize it. To say he ruled that the feds must recognize same-sex marriage in states that haven’t voted for it is to turn it upside down. There was Chief Justice Roberts’ ruling (in United States v. Windsor) that said the court has not decided on gay marriage in the country.

(Someone at the) National Organization for Marriage or  Alliance Defending Freedom would be better to speak to that question than me. Few people want to go as far as Abraham Lincoln in the Dred Scott decision of 1857 who said that all three branches of government are co-equal in interpreting the Constitution. We don’t want to have anarchy.

What about the Louisiana ban that a federal district court upheld last month?

Well, we’ll have to wait and see. In the Sixth Circuit, people thought it was going to uphold the Ohio and Michigan bans and Judge Sutton would write the majority opinion in a 2-1 ruling, so we’ll see if the circuit court is split.

At first glance, I think so.