Synod Opens with Introduction to the Assembly’s Work 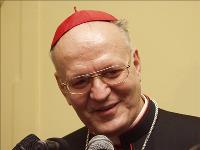 In his “Report prior to discussion” presented Tuesday morning to Synod Fathers and Fraternal delegates, the relator general Cardinal Peter Erdo,  pointed to the "privatization of love" as the greatest challenge to the family today in a world where the "feel good factor" outweighs any other value, particularly one which requires commitment and sacrifice.

Cardinal Erdo’s report introduced the work of the Synod, emphasizing the main points in relation to which the discussion of the Assembly should develop. In this sense, it is important to highlight a new element: the report of this Synod Assembly already includes the Synod Fathers’ written discourses, sent in advance to the Secretariat General of the Synod, with the aim of responding better to the collegial sense of the Assembly.

First and foremost, Cardinal Erdo’s report encourages the family to be regarded with hope and mercy, proclaiming its value and beauty as, in spite of the many difficulties, it is not a “model off course;” we live in a world of mere emotions, he continues, in which life “is not a project, but rather a series of moments” and “stable commitment appears formidable” for humanity rendered fragile by individualism.

But it is precisely here, faced with these “signs of the times,” that the Gospel of the family offers itself as a remedy, a “true medicine” that is to be proposed by “placing oneself in the corner of those who find it more difficult to recognize and live it.” No, therefore, to “doom and surrender” within the Church. “There exists a clear and broadly shared heritage of faith.”

For example, ideological forms such as gender theory or the equality of homosexual unions with marriage between a man and a woman do not find consensus among the majority of Catholics, while marriage and the family are still largely understood as a “patrimony” for humanity, to be protected, promoted and defended. Certainly, among believers doctrine is often little known or practiced, but this does not mean that it is under discussion.”

This is particularly relevant in relation to the indissolubility of marriage and its sacramental nature among baptized persons. The indissolubility of marriage is not called into question; on the other hand, it is uncontested and for the greater part observed also in the pastoral practice of the Church with those whose marriages have failed and who seek a new beginning. Therefore, not doctrinal, but rather practical questions — inseparable from the truths of faith

— are in discussion in this Synod, of an exquisitely pastoral nature.”

This leads to the need for greater formation, above all for engaged couples, so that they are clearly aware both of the sacramental dignity of marriage, based on “uniqueness, fidelity and fruitfulness,” and of its nature as “in institution
in society.” Although threatened by “disrupting factors” such as divorce, abortion, violence, poverty, abuse, the “nightmare” of precariousness and the imbalance caused by migration, explains Cardinal Erdo, the family remains a “school of humanity."

“The family is almost the last welcoming human reality in a world determined near exclusively by finance and technology. A new culture of the family can be the starting point for a renewed human civilization.” Therefore, continues the cardinal, the Church supports the family in a concrete way, although this “does not exclude the need for active commitment on the part of States” in the protection and promotion of the common good, through suitable policies.

Turning later to those who live in difficult marital conditions, Cardinal Erdo highlights that the Church is a the “House of the Father;” in relation to these people, a “renewed and adequate action of family pastoral” is necessary, in particular to enable them to feel loved by God and the ecclesial community, from a merciful perspective that does not, however, cancel out “truth and justice.”

“Consequently, mercy does not take away the commitments which arise from the demands of the marriage bond. They will continue to exist even when human love is weakened or has ceased. This means that, in the case of a (consummated) sacramental marriage, after a divorce, a second marriage recognized by the Church is impossible, while the first spouse is still alive.” Considering the diversity of situations — divorces, civil marriages, cohabitation

— Cardinal Erdo highlighted the need for “clear guidelines” so that the pastors of local communities may offer practical help to couples in difficulty, avoiding improvisation and “do it yourself” pastoral care. With regard to divorced and civilly remarried persons, he underlines that it would be misleading to concentrate only on the question of receiving sacraments — it is instead important to look at the broader context of preparation for marriage and support — pastoral rather than bureaucratic — for couples, to help them understand the reasons for the failure of their first union and to identify the causes for nullity: “As regards the divorced who are civilly married, many have said that the distinction needs to be made between the one who is guilty for the break-up of the marriage and the innocent party. The Church’s pastoral care should extend to each of them in a particular way.”

Furthermore, in view of the limited knowledge of the marriage sacrament and an increasing “divorce mentality,” “it does not seem hazardous … to believe that many marriages celebrated in the Church may be invalid.” This leads to the suggestion included in the Relatio to recognize “in the first place the obligation for two appeals of confirmation on the declaration of nullity of the marriage bond” and in any case “to avoid any type of mechanics or impression of granting a divorce” or “to avoid solutions which are unjust and scandalous.”

In this respect, it is necessary also to study the practice of various Orthodox Churches which permit second or third marriages of a penitential nature.

Finally, in the last part of the document, Cardinal Erdo focuses on the Gospel of life: existence is from conception to to natural death, he remarks, and “openness to life is an essential part and intrinsic need of conjugal love, while nowadays, especially in the West, there are those who choose not to have children and those who would have them at any cost; “in both cases, the possibility of procreating a child is reduced to one’s ability of self-determination. … Welcoming life, assuming responsibility in procreating life and the care required are possible only if the family is not conceived as an isolated unit but an active part in a network of relationships. … Increasing importance is being given to not leaving the family and families on their own, but to accompanying and supporting them in their everyday journey. … Family tragedies are often the result of desperation, loneliness and a painful cry which no one knew how to discern.” It is therefore important to rediscover a sense of widespread and concrete solidarity, to overcome any “privatization of love” which empties the family of meaning and entrusts it instead to individual choice. It is necessary to create, on an institutional level, the conditions favorable to welcoming a child and for the care of the elderly as a social asset to be protected and promoted. The Church should devote herself in a special way to education in love and sexuality, explaining its value and avoiding banalization and superficiality.

In conclusion, affirms Cardinal Erdo, the challenge for this Synod is to try to bring to today’s world, beyond the circle of practicing Catholics and considering the complex situation of society, “the attractiveness of the Christian message” about marriage and the family, giving answers that are true and full of charity,” because “the world needs Christ.”