Same-Sex “Marriages” Begin in the South 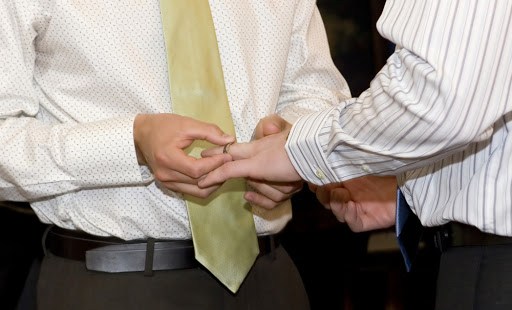 RICHMOND, Va. (AP) — Gay and lesbian couples are getting legally married in the South for the first time, crossing a threshold in a conservative region long opposed to the marriages.

The U.S. Supreme Court’s decision Monday to turn away appeals from a handful of states including Virginia means marriage bans are unconstitutional throughout the 4th U.S. Circuit. And that means similar bans in West Virginia and North and South Carolina should fall as soon as judges in each state follow through on the appellate court’s orders.

Carol Schall and Mary Townley of Chesterfield County challenged Virginia’s ban, wanting their California marriage to be recognized in the state where they are raising a 16-year-old daughter. Their victory shows that a region once considered inhospitable to gays has changed, Shall said.

"It says the South is a wonderful, welcoming and open place," she said.

But as with other civil rights battles, plenty of southern conservatives seem determined to fight to the bitter end.
"Until the courts rule on the matter, South Carolina will seek to uphold our state constitution," said the state’s attorney general Alan Wilson, a Republican.

Initial reactions to the region’s first legal gay and lesbian marriages exposed social divisions — between cities and rural areas, and between more progressive mid-Atlantic States and the Deep South. North Carolina’s attorney general, for example, has said he will no longer fight a losing battle.

"The South, like the nation, is changing," said William R. Ferris, a professor with the Center for the Study of the American South at the University of North Carolina at Chapel Hill.

"We’ll accept same-sex marriage just like we accepted desegregation and the end of slavery," Ferris added. "These other barriers that have burdened us for too long are coming down and the people in the South are open to change."

Polls show gay marriage has less support in the South than anywhere else in the country, but the ground is shifting. The latest AP-GfK survey, in September, found 34 percent of Southerners favored legalizing gay marriage in their state, up from 28 percent the year before. In the Northeast, 47 percent backed it, as did 43 percent in the West and 38 percent of Midwesterners.

Southern progressives saw Monday’s weddings in Virginia as evidence that the arc of history is bending in their direction.

These court rulings can’t help but "change the culture of the South," said the Rev. Nancy Petty, a lesbian of Pullen Memorial Baptist Church in Raleigh. Her congregation was "dis-fellowshipped" by the Southern Baptist Convention in 1992 after deciding to welcome gays and lesbians and bless same-sex marriages long before they were legal.

"I think these kinds of cultural shifts in society and in religion mean that we become a much more accepting, tolerant, diverse community," she said. "That’s really important, because we have to learn here in the South how to live with our differences, instead of fighting over our differences."

Not everyone was celebrating. Victoria Cobb, president of the Family Foundation of Virginia, said the justices disenfranchised voters who banned gay marriage, and "left Virginians without a definitive answer."

Attorney Byron Babione of the Alliance Defending Freedom, which represented two Virginia clerks in their appeal, noted that it’s still possible that another federal case will reach the Supreme Court and produce a different result.

Following North Carolina Attorney General Roy Cooper’s earlier announcement that he won’t keep spending taxpayer money to uphold the state ban approved by voters in 2012, the state’s Republican leaders in the state announced Monday they would seek to intervene, despite the high court’s decision.

"The people of North Carolina have spoken, and while the Supreme Court has not issued a definitive ruling on the issue of traditional marriage, we are hopeful they will soon," said North Carolina House Speaker Thom Tillis, a Republican running for U.S. Senate in November.

Virginia’s 2006 ban on gay marriages also was challenged by Timothy Bostic and Tony London, who were given flowers by a pair of strangers — Larissa Boose Williams and her 10-year-old daughter Sedona, who arrived at Norfolk Circuit Court hoping to witness history.

"It’s huge for it to be legal in the South. It’s long overdue," said Williams, a Norfolk resident. "We’ve got those old Southern ways. People think they can vote on the equal rights of others. You can’t do it. The whole point of democracy is to help protect the minority from the majority."