Franciscan Priest Kidnapped After He Appealed to Islamic Court 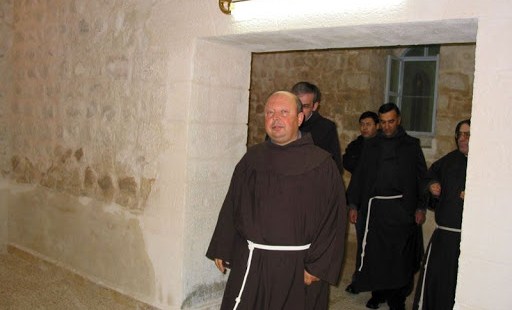 Convent had suffered abuses and harassment

Knayeh, Syria (Agenzia Fides) — Father Hanna Jallouf OFM was kidnapped along with his parishioners after his recent visit to the Islamic Court, where he had gone to report harassment and abuse suffered in recent weeks by the convent from brigades of Islamists who have taken control of the government in Damascus.

The Franciscan parish priest was kidnapped in the Christian village of Knayeh along with some of his parishioners by a group of militant jihadis in the night between Sunday and Monday.

Local sources told Fides that in the last three years Father Hanna had managed to guide the local Catholic community, even when the territory had fallen under the control of anti-Assad rebels. In the course of time, the jihadists of the Islamic State of Iraq and the Levant (ISIL) and then the Jabhat al-Nustra assumed positions of power in that area of northern Syria. Under the anti-Assad groups abuses began against the local population: demands for taxes, seizure of property and empty houses that were occupied by the jihadist militia.

The church and convent were left open and active, despite having to give up ringing the bells and being obliged to cover statues and sacred images exposed outdoors. With difficulty Father Hanna was able to maintain channels of contact with the militia groups to ensure minimum viability in the activities of the parish. Every five or six months he was also allowed to go out from the area controlled by the rebels — the last time, less than two months ago to undergo surgery in Lebanon — and then he had always returned and resumed his pastoral mission.

The school remained open, despite having to submit to the rules imposed by the new Islamist regime.

Recently, the situation had become more complicated. Expropriations and looting by militias intensified.
The Franciscan parish priest went to the Islamic court — the body set up in the area under the control of the Islamists to administer justice according to Islamic law —  in order to denounce harassment. A few days later, he and some of his young parishioners were kidnapped. This episode reveals the state of the judicial system of the pseudo-legal bodies with which the Islamists impose their "order" in areas under their control.

"Now," says one of Father Hanna’s confreres to Fides, "we do not know what to do. There are many groups and armed gangs acting independently, without supervision. There is not a single point of contact. This increases the confusion. We are waiting for someone to turn up. And we pray that our friends will soon be released."