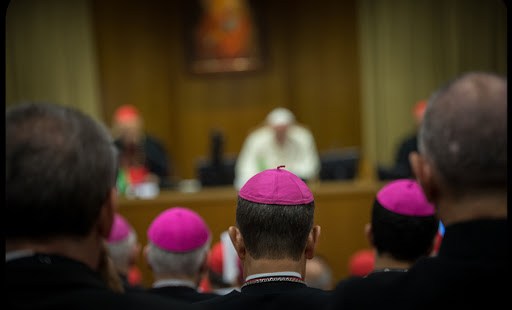 Let me be clear right up front: I think the Extraordinary Synod on the Family is a wonderful initiative. It’s a blessed opportunity to begin a conversation with the world on the truth and beauty of marriage and family in God’s plan.

I read recently that couples whose marriages are in trouble wait an average of six years before seeking counseling … basically only when their marriage has reached meltdown. If intervention had occurred in their first year of marriage – to help them understand its profound meaning and develop the skills to work as a team toward that goal – things may never have reached a crisis level.

One might say the same thing about the timing of the Synod. The breakdown of marriage – with its dire consequences for individuals, families and societies – was foreseeable in the late Sixties. With the continuing rise in cohabitation, single-parent families, children born to single moms and growing up in homes without both biological parents married to each other, the Church must urgently find new ways to communicate what marriage and sexuality mean and help couples achieve the many, many benefits of committed, life-long marriage.

The bishops will find a receptive audience. By large majorities, Americans place a high value on lifelong marriage, but in practice they don’t know how to get there and often “settle” for less.

This brings me to Day Two of the Synod. Maybe you had to be there to appreciate the context of what was being discussed. Can I be honest? I am confused by a lot of the reporting, the press conference summaries and even the full texts of what some of the auditors have said.

Example One: Today Fr. Federico Lombardi of the Holy See Press Office reported on the discussions of “a need for a more sensitive and inclusive language about family life that will not turn people away from the Church.” And a Canadian priest, Fr. Tom Rosica, gave several examples from bishops who were at the meeting:

Language such as "living in sin," "intrinsically disordered," or "contraceptive mentality," are not necessarily words that invite people to draw closer to Christ and the Church.

I’m excited about the possibility of finding new attractive “magnetic” ways to draw people into understanding and accepting the fullness of Church teaching. What we have is a treasure. The answer to everyone’s needs. But in twenty years of working for the institutional Church, I don’t recall even one member of the clergy speaking or writing to the public in such terms. Has anyone in the Church used the phrase “living in sin” since the 1950s? You can find “intrinsically disordered” and “contraceptive mentality” in teaching documents, but the public never reads them anyway.

So this point reminds me of the oft-repeated accusation that the Church’s opposition to condoms was responsible for the AIDS epidemic in Africa. Really? Anyone who’d forgo using condoms in adherence to Church teaching is also likely to abstain from sexual activity before marriage and remain faithful within marriage. They’d be at close to zero risk of acquiring AIDS.

Example Two: Ron and Mavis Pirola, co-directors of the Australian Catholic Marriage and Family Council, caused confusion with the example they chose as a “model of evangelization” to illustrate how families successfully handle the tension of “upholding the truth while expressing compassion and mercy,” a model they recommend to the Church:

Friends of ours were planning their Christmas family gathering when their gay son said he wanted to bring his partner home too. They fully believed in the Church’s teachings and they knew their grandchildren would see them welcome the son and his partner into the family. Their response could be summed up in three words, "He’s our son.”