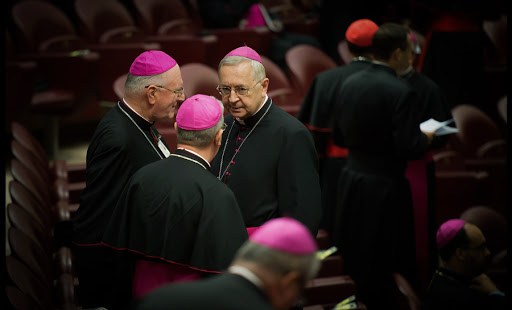 When our youngest son was a little guy, he had a peculiar habit that we still laugh about today. Whenever his siblings fought, he’d drop whatever he was doing, and go charging into the room, fists clenched, yelling, “Fit-fight! Fit-fight!” The siblings would squabble, and their little brother would carry on his commotion until the excitement ended. Then he’d go back to whatever he was doing before the disagreement broke out, as if nothing at all had occurred. Only recently did we figure out that "fit-fight” meant "fist-fight," but why he was so ready to rumble whenever his sibligns argued still eludes us.

I’m reminded now of our son’s funny quirk, not because of his siblings’ behavior, but rather because of what I’m seeing in both secular and Catholic media addressing the differing opinions of German Cardinal Walter Kasper and American Cardinal Raymond Burke on a topic that will be discussed during the Synod on the Family. In particular, substantial attention has been given to the Cardinals’ apparent disagreement on Church teaching and/or discipline regarding Holy Communion for Catholics who are divorced and remarried.

Many in the media – news writers as well as columnists and bloggers – have dropped what they were doing, and have charged into the mix (figuratively speaking), chanting their own rendition of “fit-fight.” Consequently, lines have been drawn, and now there are two sides to the issue, which suggests that in the end there will be a “winner” and a “loser.” I wonder how this productively serves the Synod and the episcopacy in their monumental task of discerning the issues at hand and God’s will for the Church now and for the future.

That there is a difference of opinion is clear. Both cardinals have stated so repeatedly.

In a February 28, 2014 address to a consistory on family, Cardinal Kasper suggested that Communion for divorced and remarried Catholics may be permissible in some circumstances. “It is not enough to consider the problem only from the point of view and from the perspective of the Church as a sacramental institution. We need a paradigm change, and we must — as the Good Samaritan did — consider the situation also from the perspective of those who are suffering and asking for help,” he said. Although the Holy See has not confirmed it, Cardinal Kasper has claimed that Pope Francis supports his approach.

Cardinal Burke maintains that the canon law prohibitiom on receiving the Eucharist — in the case of a person who obtained a civil divorce and has "remarried" without obtaining an annulment — is based on Jesus’ own words and therefore cannot be changed. “I cannot see how [Cardinal Kasper’s proposal] can go forward if we are going to honor the words of the Lord himself in the Gospel according to St. Matthew, in which he said the man who divorces his wife and marries another commits adultery.” He also suggested that no one should presume to put words into the Pope’s mouth, as the Holy Father is capable of making his own views clear.

Granted, it’s notable that two prominent Cardinals have taken oppositie stances on this issue. But there are many Cardinals and bishops with various perspectives — all of which will be discussed and weighed during the Synod. In the interim, taking sides on issues can incubate animosity. What needs to be highlighted is not the differences, but the commonalities of faith and mission.

When Pope Francis addressed the Synod Fathers at the October 6 assembly, he expressed his wish that they speak with frankness and charity, telling them, “…it is necessary to say everything that in the Lord one feels should be said, with human respect, without fear. And, at the same time, one must listen with humility and receive with an open heart what the brothers say.”