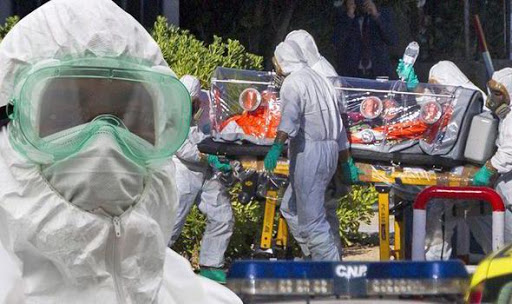 MADRID (AP) — Two doctors who treated a Spanish nursing assistant diagnosed with Ebola have been admitted to a Madrid hospital for precautionary observation, bringing to six the number being monitored at the center, health officials said Thursday.

A spokeswoman for the Carlos III hospital said neither of the doctors, nor the woman’s husband — who is also under observation — has shown Ebola symptoms.

The doctors tended the nurse, Teresa Romero, before she was diagnosed as having Ebola on Monday. Two other nurses in quarantine are awaiting tests for the virus.

Romero is the first person known to have caught the disease outside the outbreak zone in West Africa. She is in stable condition without fever.

The official spoke on condition of anonymity in keeping with hospital regulations.

Ebola has killed at least 3,800 people in West Africa with no signs of abating. The presidents of Liberia, Guinea and Sierra Leone, the countries hardest hit in the outbreak, are appealing to the World Bank on Thursday for more help for their nations.

In Germany, a man infected in Liberia arrived Thursday at a hospital in Germany for treatment — the third Ebola patient to be flown to the country.

The St. Georg Hospital in Leipzig said the man, who works for the United Nations in Liberia and whose name wasn’t given, will be treated in a special isolation unit.

The first person to be diagnosed with Ebola in the United States, Thomas Eric Duncan, died Wednesday in Dallas. Five major U.S. airports plan to try to catch any travelers from Ebola-ravaged countries who may be carrying the disease by checking their temperatures on arrival.