The Man Working to Bring Down China’s One-Child Policy 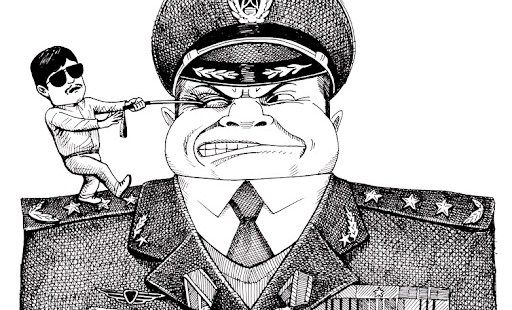 WASHINGTON – Even before he sat in his seat at the Heritage Foundation Thursday, Chen Guangcheng received cheers from the audience. With the help of his wife, the blind, 42-year-old Chinese dissident had shuffled up three steps onto the stage of the auditorium. After releasing his wife’s left arm, Chen strolled to an empty wooden chair. Audience members recognized the man in the grey suit and striped blue tie, and seven or eight of them clapped. Chen smiled, jutted out his right arm, and waved his right hand.

To human-rights and pro-life leaders, Chen is a saint and icon, the public face of a campaign to pressure China to drop its notorious one-child policy. In one ad for a congressional event, Rep. Chris Smith (R-N.J.) and Reggie Littlejohn of Women’s Rights Without Frontiers stood astride a large poster that bore Chen’s face. Both Smith and Littlejohn were shown wearing black rectangular glasses, similar to the spectacles Chen wears.

“Jail. Beatings. Torture,” Smith told the audience of the afflictions Chen has endured. “I know of no other person on Earth who has personally suffered so much for attempting to stop this cruelty to women. He is a hero.”

Chen’s story became famous outside his native China two years ago.  A “barefoot lawyer,” the self-taught Chen filed class-action lawsuits on behalf of peasants, including women who had been forced to abort their pregnancies. Chinese officials threw Chen in prison for four years and placed him under house arrest for 19 months. The actor Christian Bale brought a CNN camera crew to China in a futile attempt to free Chen. Chen escaped his captors in 2012. After climbing over a wall at night and breaking his ankle, Chen fled his village to the U.S. Embassy in Beijing. He asked for and received asylum to the United States.

In his 15-minute speech, Chen described China’s one-child policy in poetic terms. He said the policy reflected the wishes of a “power elite” within the country’s Communist Party that rules through violence. “It used to be in China that your home was your castle. But under the Communist Party they even put their hands into your womb and they kill your baby in your face,” Chen said.

Smith said China’s one-child policy was a tool for both genocide and terrorism. “Abortion is a weapon of mass destruction. Hundreds of millions of lives have been eliminated. Women don’t have the legal right to protect themselves from this totalitarian government,” Smith said, departing from his prepared remarks.

Littlejohn’s speech emphasized the emotional and spiritual pain women suffer under the policy. The president and founder of the Women’s Rights Without Frontiers, Littlejohn showed a video on two 55-inch LCD televisions at the auditorium that her nonprofit made.  She told the story of a woman pregnant at seven months who had violated the policy and said she could not pay the fine to dispose of her baby’s body. One well-known image showed the woman lying on a hospital bed with her dead fetus crumpled beside her feet. “These are the biggest human rights issues, the biggest women’s issues in the world today,” Littlejohn said.

Some human-rights advocates, however, say China’s one-child policy has become less oppressive. Women can pay a $6,300 fine to the government if they wish to bear a second child. China’s government announced that parents who grew up as an only child can have more than one baby. The policy is more strictly enforced in urban than in rural areas, according to a story in The National Interest.

Littlejohn rebutted the idea that China has relaxed its policy. She said 10 million women of child-bearing age grew up as single children, a small fraction of the eligible population.