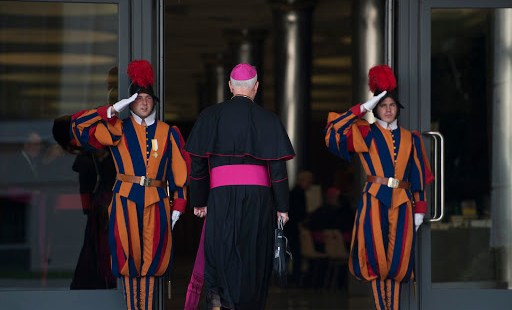 Sessions to address criticism and questions coming from Synod fathers

(Vatican Radio) The Synod Fathers of the Extraordinary Synod on the Family on Monday afternoon began meeting in small working groups, called “circoli minori” or “minor circles." This second phase of the synod comes after the "post-discussion report" of the Synod was presented Monday morning by the General Rapporteur of the Assembly, Cardinal Peter Erdo.

Cardinal Erdo was joined Monday afternoon at the Holy See Press Office by Cardinal Luis Tagle of Manila, Philippines, Cardinal Ricardo Ezzati Andrello of Santiago, Chile, and the Archbishop of Chieti-Vasto, Bruno Forte, to discuss the report, and the state of Synod.

Cardinal Erdo reiterated the report was a “working text," and noted “there has been criticism and questions” from some of the Synod Fathers, especially about the term “graduality.”

Cardinal Ezzati stated the Synod is not taking a “scientific approach” but that of someone approaching the issues “with the heart of a Shepherd.” He also said he would like to see other issues discussed during the “circoli minori."
“There has been much talk about parents and little talk about children,” he said.

When asked about the report’s language dealing with homosexuality, in particular where it said, "Homosexuals have gifts and qualities to offer to the Christian community," Archbishop Forte said this is based on human dignity.

“We must respect the dignity of every person,” Archbishop Forte said. “To be homosexual does not mean that this dignity must be not recognized and promoted. So the fundamental idea is the centrality of the person independently of the sexual orientation.”

Cardinal Tagle noted many Synod Fathers said within the discussions they had felt the spirit and atmosphere of the Second Vatican Council.

“Of course, the Spirit of Vatican II is not divorced from the documents of Vatican II,” he said. “Vatican II definitely reflected on the Church and its Mission in the contemporary world.”

“The Synod participants are being asked to see what needs to be deepened. What needs to be clarified? What other things should be raised, which we have not yet raised,” said Cardinal Tagle.

“So the drama continues,” he said.