Author of “Contraception: Why Not?” Sees Contradiction in Synod’s Discussion of Birth Control 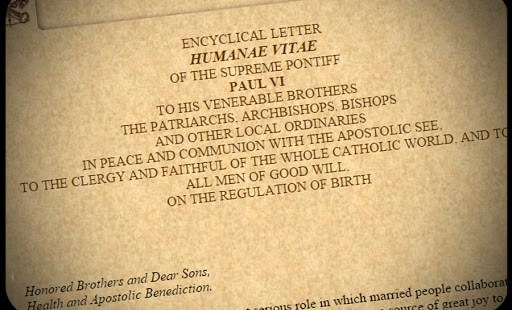 The section of the interim report on contraception (54) is unproblematic and even good, in that it speaks about the beauty of being open to new life, of the goodness of natural methods, of the challenge of a declining birth rate and the need for spouses to receive formation that can help them become ever more self-giving.

There is, however, one cryptic, problematic, line. That line states: “We should go back to the message of the Encyclical Humanae Vitae of Paul VI, which underlines the need to respect the dignity of the person in the moral evaluation of the methods of birth control.” (54)

What is problematic about this line is that no such “message” appears in Humanae Vitae. Of course, the interim report was written hastily and perhaps there is a bit of sloppiness of expression here, for it seems to state that the dignity of the person means that the person has the freedom to morally evaluate the methods of birth control. And “moral evaluation” here seems to mean, “has the right to decide which methods are moral and which are not.” This interpretation seems to follow one that was advanced by many theologians after Humanae Vitae that stated that spouses were free to do what their consciences dictate in respect to contraception.

Whether that is what the authors of the interim report meant or not, it is surely not a concept present in Humanae Vitae.

The conscience, of course, is not the same as our opinion or judgment about whether a certain kind of act is right or wrong. The Catechism of the Catholic Church states:

Deep within his conscience man discovers a law which he has not laid upon himself but which he must obey. Its voice, ever calling him to love and to do what is good and to avoid evil, sounds in his heart at the right moment. … For man has in his heart a law inscribed by God. … His conscience is man’s most secret core and his sanctuary. There he is alone with God whose voice echoes in his depths. (1776)

Humanae Vitae speaks of the law of God, that man’s conscience is able to know. In section 10, the section on Responsible Parenthood (better translated “Conscious Parenthood),* we read:

The conscious parenthood
[conscia paternitas ]
of which we speak here has another intrinsic foundation of utmost importance: it is rooted in the objective moral order established by God – and only an upright conscience can be a true interpreter of this order. For which reason, the mission [munus]
of conscious parenthood [paternitatis consciae]
requires that spouses recognize their duties toward God, toward themselves, toward the family, and toward human society, as they maintain a correct set of priorities.”

Humanae Vitae echoes constant Church teaching that there is an objective moral order – and that human dignity rests in our ability to discern that objective moral order and freely conform our actions to it. The role of the conscience is not to determine whether abortion, adultery, murder, or contraception are wrong, but it is to determine whether various actions qualify as abortion, adultery, etc. The Church, which has the power to interpret the natural law, teaches us that contraception violates the objective moral order in respect to both the procreative and the unitive meanings of the marital act (HV, 12). After it condemns abortion and sterilization, Humanae Vitae 14 states: “Similarly, there must be a rejection of all acts that attempt to impede procreation, both those chosen as means to an end and those chosen as ends. This includes acts that precede intercourse, acts that accompany intercourse, and acts that are directed to the natural consequences of intercourse.” Here Humanae Vitae makes it clear that all forms of contraception are not in accord with God’s plan for marital love.

A well-formed conscience would know this, a conscience likely formed by reading Humanae Vitae or learning what the Theology of the Body is all about. Someone who has prayerfully read Humanae Vitae and learned the concepts of the Theology of the Body and who still believes that impeding the baby-making power of the marital act is fully in accord with God’s will and constitutes an act of complete self-giving to one’s spouse, would need to ask a priest or a knowledgeable Catholic for further guidance. Should he or she still not understand/accept the Church’s teaching, this person would be in the same predicament as a person who thought abortion or slavery or rejection of immigrants is moral. For a Catholic, a key question is: if/when I disagree with the Church about some teaching, who is more likely to be right, the Church or I?

Clearly, I am not advocating blind obedience here; I am advocating that Catholics become fully informed but also that they be humble if they find it difficult to accept a teaching. My recommendation would be to spend a lot of time in front of the Blessed Sacrament and ask Jesus to enlighten them when they find a Church teaching objectionable.