Being homeless is no fun, as anyone who has ever been out on the street can tell you.

JP Steinberg can. He and his wife and kids lost their home and went through “couch-surfing” and other forms of homelessness for a year. But they’re back on their feet, and Steinberg is now able to help others understand what the experience is like and just maybe help people know how they can avoid it.

He was the guest speaker at a retreat for eighth graders from St. Mary’s Parish, which has church buildings in the two South New Jersey towns of Barnegat and Manahawkin. The students are preparing to receive the sacrament of Confirmation. But the setting of the retreat itself was a “Cardboard Box City,” constructed on the church grounds in Manahawkin to help kids get a feel for what homelessness is like. 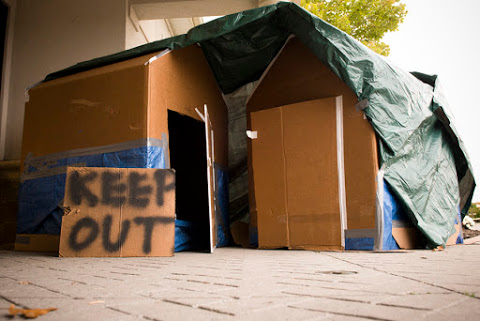 The group of 25 participants, which included Msgr. Ken Tuzeneu, pastor, slept out all night in cardboard boxes, similar to those used by homeless people in big cities.

The retreat was scheduled for the night of Oct. 11, so it was starting to get chilly outside. Plus, there were periods of rain throughout the night.

“For us it’s kind of like camping,” said Msgr. Tuzeneu, who is on the board of Family Promise, a local agency that helps the homeless. “To do it for one night it’s not that big of a deal, but to have to live like that—to do it even for a week would be tiring after a while. You get to leave the box and go into a building, go home and have a shower, but some people don’t have that. So it’s a small sample of what homelessness is like."

Hearing the personal testimony of JP Steinberg also made a difference, the priest said later.

Steinbergspoke about how Family Promise helped him and his family when they had nowhere to go.  He emphasized how important it is to never forget there are people around to help in case of need.

“It’s good to see that homelessness is not entirely ignored but that there are people willing to help others and take part in an exercise of empathy, so to speak,” Steinberg said later. “The event was fun for kids, but I also think they get it at the end of the day. They really do understand.”

The young retreatants expressed a change in their feelings about the homeless. "They lack what we have, which makes it very difficult for them,” said John Mollo of St. Mary’s Young Adult Group. “I would give them what they need whenever I can."

"I now know how rough it is for them," added Amy Kaszuba, also of St. Mary’s. 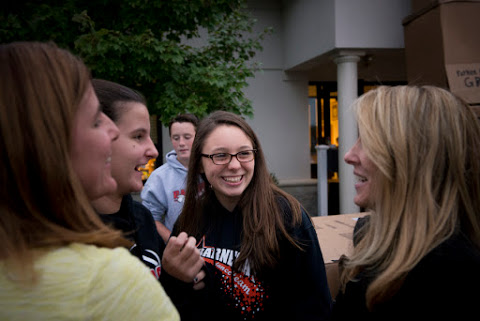 The retreat had a few elements that the homeless might not have in their lives: an opening prayer, an ice-breaking game, hot dogs and soda, and a movie—The Blind Side, the 2009 film about of Michael Oher, a homeless and traumatized boy who became an All American football player.

But even though some kids were moved inside because the rain started seeping through their cardboard boxes halfway through the experience, they didn’t get off easy. They may have found shelter inside the parish center gym, but they still had to forgo the “comfort” of a bed or cot. The hard floor was a good reminder that some people have it, well, pretty hard in life.

There was one other element to the evening that took on a providential character. Though the retreat was planned well in advance, it ended up being the same day as the funeral and burial up in Newark of a priest who had dedicated his life to serving the poor and homeless, Father Benedict Groeschel. In his honor, the retreatants built a city “skyline” with cardboard boxes, evocative of the metropolis where Father Groeschel and his Franciscan Friars of the Renewal sought out those who “have nowhere to lay their heads.” 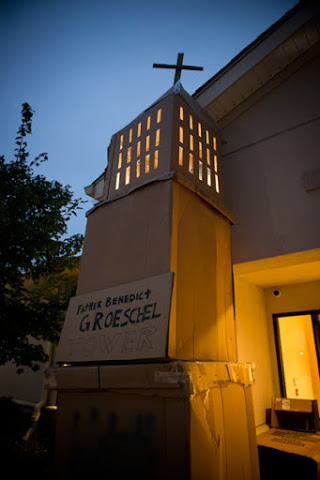