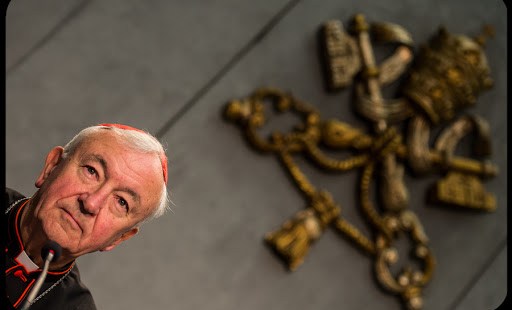 Commenting from Rome on the mid-term report of the Extraordinary Synod on the Family, the Archbishop of Westminster, Cardinal Vincent Nichols, has said that the Relatio Post Disceptationem has “served to crystallize the hopes and difficulties” raised in the Synod’s first week. Describing it as a “stimulant to very searching and creative discussions,” in the small language group of which he is a member, he conceded that as it was “obviously composed under pressure,” it has “easily given rise to some misinterpretation.”

The relatio, he stressed, is “not a doctrinal or decisive document,” and is intended, as it states, merely “to raise questions and indicate perspectives that will have to be matured and made clearer [on] reflection.”

The report especially seeks, he says, “to proclaim and strengthen the pastoral care of the Church,” the warmth and reach of which is crucial, even if it is “not always known or experienced.” One of the Synod Fathers' deepest desires, according to Cardinal Nichols, “is to blow a trumpet for marriage and family as a central part of God's plan for our happiness and fulfilment.”

Damian Thompson, writing in the Spectator, says the Synod is revealing extensive divisions “which are certain to be replicated in parishes around the world.” Declaring himself "astonished" by the relatio’s “boldness,” he says “the principle of graduality is not new,” but that an “earthquake” has been caused by the relatio’s implication that the Church is moving towards what he calls “a much more relaxed attitude towards gay couples and people in second marriages (ie, divorced people or those married to them).”

Noting that “St John Paul II emphasized that it should be Catholics that move gradually, not the Church,” he distinguishes between what he calls the Church’s “line” and “its teaching on the sinfulness of all sexual acts outside marriage.” As he says, the Synod lacks the authority to change Church teaching, which will “remain intact long after this pontificate.” Unfortunately, he observes, "the public, including Catholics in parishes, doesn’t necessarily understand that.”

John Smeaton, director of the constitutionally non-religious lobby group SPUC, condemned the relatio on behalf of the new SPUC-supported organization Voice of the Family, saying that “Catholics are morally obliged to oppose the course being taken within the Synod.”

“Those who are controlling the Synod have betrayed Catholic parents worldwide,” he claimed, adding, “We believe that the Synod’s midway report is one of the worst official documents drafted in Church history.”

Expressing relief that the document is “a preliminary report for discussion, rather than a definitive proposal,” Smeaton urged Catholics to refrain from complacency or misguided obedience in the face of what he called, “attacks on the fundamental principles of the natural law.”

Mark Dowd, former chairman of the gay Catholic group Quest, writes in the Tablet that the three sections on homosexuality in the 58-section relatio “herald a sea-change” in the Church's attitude towards same-sex-attracted people. While he says many who have abandoned their faith will see the relatio’s comments as “grudging words that gay couples do have some merits,” he says it should not take a genius to realize that questions in the relatio about whether the Church is able to welcome and guarantee a fraternal home for homosexuals are tantamount to a confession that gay people “have very often been denied such fraternity and welcome.” Arguing that nothing less than the truth is at stake, he says “it is as if the Synod has nervously stepped onto a conveyor belt — and it is not quite sure where it will take them.”

Far from being an “earthquake,” Father Alexander Lucie-Smith, a moral theologian who writes for the Catholic Herald, says the report merely “reflects what theologians, especially Roman theologians, Jesuit theologians and Italian theologians, have been saying for some time.” Commending the Synod for taking account of the effects of migration and money on family life, he sums up the relatio's central point as “let us engage with reality, and let us build on what is positive, wherever we can find it.”

Lucie-Smith has since taken issue with what he regards as the poor quality of the relatio's English translation, criticizing its lack of clarity which he says obscures the central Gospel truth within the document. “Jesus came to call sinners, to repentance, and to new life,” he says, paraphrasing, “How can we make sure that all people, whatever their situation, hear and profit by the universal message of salvation proclaimed by Our Lord?”

Recognizing that the relatio is an interim document, Lucie-Smith hopes the final report will highlight the role of children and the pre-eminent importance of their needs. “It strikes me,” he says, “that because the world has fallen for lust and romance so badly, it has forgotten what really matters — the next generation. We are not sex gods and sex goddesses, but mothers and father, in fact or in potency. That is what we need to deal with, and the bringing up of children is real true love.”

Speaking on the BBC World Service, Catholic Voices member Caroline Farrow praised how the Church had managed to communicate its wish to change culture.  Stressing that the relatio is a working document, she said the Synod was trying to grapple with how “Jesus Christ gave us a very strong message in terms of how we must live our lives, but in the past the approach towards certain people — and it isn't just people who identify as being gay — has perhaps left them feeling alienated and left out.”

In response to the apparent novelty of a Church document recognizing that gay people have “gifts and qualities to offer,” Farrow pointed out that simply by virtue of our creation as human beings, “we all have gifts and talents to offer, regardless of what our orientation is, and certainly this is what this phrase accepts, acknowledges, and welcomes.”

“Catholic teaching,” she said, “is going to remain that all sexual acts need to be within the context of a marriage, they need to be between a man and a woman, and they need to exclude contraception.”

The challenge for the Church, she said, is “to help people to understand why we have those teachings.”