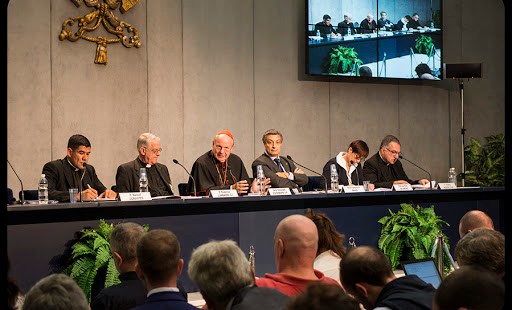 Surprising action taken even before the final report is completed

In an unexpected move, the Vatican has issued a revised English translation of the three paragraphs in the interim report addressing homosexual persons.

Father Federico Lombardi, director of the Holy See Press Office, presented the document as an improved translation, explaining that someone had pointed out errors in the original English translation to the General Secretariat and, accordingly, the Secretariat made the revisions and then the press office published the revised interim report in English.

Reporters were quick to point out that the original English translation of these passages was actually more faithful to the official Italian version than is the revised text, and they asked if there were other reasons for the changes. Father Lombardi did not answer that point directly, but added that there may even be a third translation of the interim report.

He cautioned that people should not be concerned because it is only an interim report. The final report to be issued Saturday is the only one that matters, he stated, adding that "Some mistakes are made." And he underscored the fact that the official version is the Italian one.

Nevertheles, the changes are widely seen as an effort to address the concerns of English-speaking Synod Fathers who have voiced misgivings about the ambiguities present in the original.

Some noteworthy changes are as follows:

Homosexuals have gifts and qualities to offer to the Christian community: are we capable of welcoming these people, guaranteeing to them a fraternal space in our communities? (emphasis added)

Homosexuals have gifts and qualities to offer to the Christian community. Are we capable of providing for these people, guaranteeing […] them […] a place of fellowship in our communities? (emphasis added)

But the text made no substantive change to another sentence in that paragraph that also raised concerns:


Often they wish to encounter a Church that offers them a welcoming home.
Are our communities capable of providing that [i.e., providing a fraternal space and a welcoming home], accepting and valuing their sexual orientation, without compromising Catholic doctrine on the family and matrimony?

Are our communities capable of this [i.e., providing for these people and guaranteeing them a place of fellowship], accepting and valuing their sexual orientation, without compromising Catholic doctrine on the family and matrimony?

Two reporters addressed the clear distinction between "welcoming" homosexuals and "providing for" them, pointing out that "Welcome" implies accepting them as they are and "providing for" suggests a need for pastoral care that would help them overcome sin. No further comment came from the press office.

One change to paragraph 51 is particularly significant.

Matrimony refers, of course, to the Sacrament of Holy Matrimony, while marriage is a broader term encompassing civil marriage as well as marriages recognized by other faiths. The change underlines the Church’s opposition to civil laws granting equal status to same sex unions.

The changes to paragraph 52 are largely cosmetic except for the very significant replacement of "partners" with "persons," reflecting the Church’s view that persons in homosexual unions should not be considered juridical partners.

The full text of the revised and original paragraphs from the interim report are reproduced below.