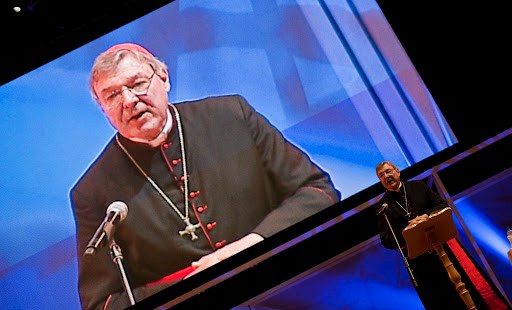 Reassures “good practicing Catholics that doctrinal changes are not possible”

Rome — Australian Cardinal George Pell called the Synod on the Family’s “relatio” — the document released at the Synod’s mid-way point — “tendentious and incomplete” and sought to reassure Catholics that “doctrinal changes are not possible.”

His comments, reported by The Tablet’s Christopher Lamb come amid criticism from many Catholics who view the document as a call for radical changes in the Church’s pastoral approach to homosexuals, the divorced and remarried.

Cardinal Pell, one of Pope Francis’ close advisors who this summer was appointed watchdog over Vatican finances, said that “three-quarters of the participants in the synod hall who had made interventions had voiced problems with the text.”

“The question of Communion for divorced and remarried is only the tip of the iceberg,"  he told The Tablet. "In seeking to be merciful, some want to open up Catholic teaching on marriage, divorce, civil unions, homosexuality in a radically liberalizing direction, whose fruits we see in other Christian traditions,” he said.

He added it was “strange that there was so little in the document on scriptural teaching and magisterial teaching on marriage, sexuality, family.”

Cardinal Pell explained: “The task now is to reassure good practicing Catholics that doctrinal changes are not possible; to urge people to take a deep breath, pause and to work to prevent deeper divisions and radicalizing of factions.”

Lamb reports that Cardinal Pell pointed out Jesus’ teaching on marriage and divorce is a fundamental, which needs to be accepted. He added that children “have a right to a mother and a father."

After discussion and further revisions the Synod Fathers will present the “relatio” to Pope Francis on Saturday.