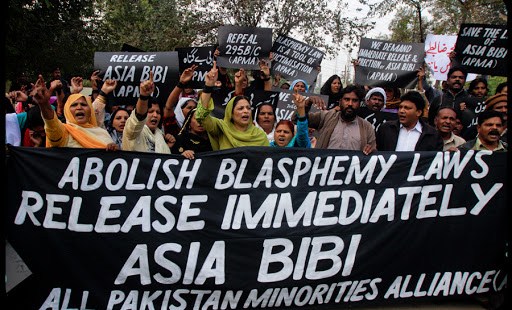 Lahore (AsiaNews) — After a hearing that lasted several hours, the Lahore High Court today upheld the death penalty sentence passed by a lower court against Asia Bibi, following her conviction in 2010 on blasphemy charges in 2010. Since then she has been on death row.

In Pakistan, many civil society groups have expressed solidarity towards the Christian mother of five, as well as strong concern about the court’s decision, which came after five postponements.

Human rights activists and organizations around the world also are demanding justice for a woman who has become a symbol of the struggle against Pakistan’s infamous "black law."

Her lawyers vowed to appeal to the Supreme Court, the third and final stage in legal proceedings, hoping that the conviction will be overturned.

Asia Bibi was sentenced to death in November 2010 and since then has been in solitary confinement for security reasons, a symbol of the struggle against blasphemy.

In 2011, Punjab governor Salman Taseer, a Muslim, and Minority Affairs Minister Shahbaz Bhatti, a Catholic, were both murdered for coming to her defense.

On several occasions, Pakistani Christians organized days of fasting and prayer for her release, joined by Muslims as well.

In its ruling, the court upheld the allegations made by two Muslim women—sisters—who claim to have heard Asia Bibi’s blasphemy.

During the four-hour hearing before a panel chaired by Judge Anwar ul Haq, the defense filed written arguments dismantling the prosecution’s case by exposing the witnesses’ lack of credibility and the obvious leveling of false accusations, according to Fides news agency.

“The judge held as valid the allegations of the two Muslim women who testified concerning the blasphemy Asia is alleged to have committed," said lawyer Naeem Shakir (who is a Christian). "They are the women with whom Asia had the altercation that led to the case,” Shakir said. “Justice is increasingly in the hands of the extremists,” he added.

Shakir had told Fides ahead of the hearing that Bibi’s defense team had hoped to "demonstrate the existence of a conspiracy against this woman." The complainant in the case, he recalled, is Qari Mohammad Salam, imam of a mosque in the village of Ittanwali, in the district of Nankana Sahib in Punjab. "But the complaint took place on June 19, six days after the the alleged act of blasphemy. The complainant’s statement is based on hearsay, since the imam was not present when, according to what was said, Asia insulted the Prophet Muhammad. Neither did the complainant directly hear any blasphemous expression from the defendant. The entire case is based on the testimony of two sisters who had quarreled with Asia and felt humiliated; this apparently triggered the complaint simply for resentment and revenge."The lawyer said he was confident of an acquittal "if the Court’s decision is based on the principles established in the criminal justice system and whether or not it will be influenced by the pressures of sectarian groups and extremists."
For Bishop Rufin Anthony of Islamabad/Rawalpindi, the court’s decision is "heart breaking."

In view of the situation, he calls on Christians around the world to "join us for a day of prayer for Asia Bibi and others accused of blasphemy."

"We will have the day of prayer for the condemned on Sunday," said Father James Asher, from the Archdiocese of Lahore. "We urge everyone to be a part of it."

With a population of more than 180 million people, Pakistan is the sixth most populous country in the world, and with 97 percent of its population being Muslim the second largest Muslim nation after Indonesia. About 80 percent of the Muslims are Sunni, while Shias are 20 percent. Hindus are 1.85 percent, followed by Christians (1.6 percent) and Sikhs (0.04 percent).

Scores of violent incidents have occurred in recent years, against entire communities (Gojra in 2009, and Joseph Colony, Lahore, in March 2013), places of worship (Peshawar, September last year) and individuals ( Sawan Masih, Asia Bibi, Rimsha Masih and Robert Fanish Masih, who died in prison), often perpetrated under the pretext of the country’s blasphemy laws.