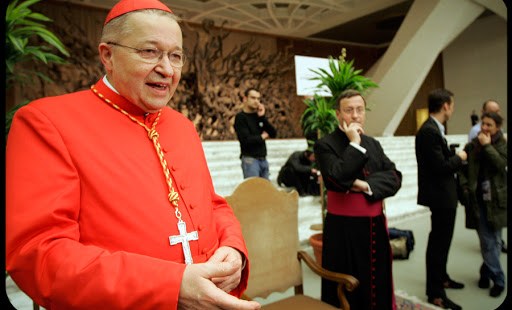 Civil unions, the divorced and remarried, homosexuals: The archbishop of Paris talks with Aleteia about issues under discussion in Rome

In the current work of the Synod, can we say, as some media are affirming, that we are, in some cases, moving towards an opening for the divorced and remarried to receive Communion?

Cardinal Vingt-Trois: Today, we cannot say anything like that. We cannot know either what will result from the work of the Synod in general on this subject. The work of the Synod has just started (note: the Extraordinary Synod this year will be followed by an Ordinary Synod in October 2015). Furthermore, the Synod of Bishops is a deliberative body, in which the members reflect on questions and put forth proposals.  It has no power of decision. We will have to wait until 2015 and the Pope’s Apostolic Exhortation to have the answer to that question.

In recent days, the media has also been talking of a change in the Church’s discourse in relation to homosexuals. What do you want to say about this issue?

Cardinal Vingt-Trois: The Church invites homosexual persons who want to live as Christians to review their lives and circumstances and to reflect on them in the light of the Gospel. That does not make homosexuality a symmetric model of heterosexuality. We need to encourage homosexual persons to live their Christian life in this homosexuality and practice the virtue of chastity to which all are called, homosexual or not. We should also be concerned about children: in many cases, it is the children of a heterosexual couple in which one spouse or partner has changed his life. Children are often more mature than one would think. They put up with the situation, but that does not mean they do not suffer.

"Accompany." This word appears often in the Synod’s work, echoing those of the Pope on "the art of accompanying." How should the Church accompany couples and families, regardless of their situation?

Cardinal Vingt-Trois: This is the pastoral art in general, it is the attitude that the Church should have towards the people who turn to Her. We must first be aware of what they are going through, listen to them. But not only so that people can get their problems off their chest, but to help them think, in the light of the Gospel, to answer questions, help them overcome their fears, to implement proposals. In the case of so-called "irregular" situations, such as for example civil unions, the question is not whether we are going to judge or condemn, but how we can help people open up to a larger dimension of love. By building on the dynamics of their love, the Church will help them to reflect and to improve their situation. To progress always involves changing something. The challenges of life always require a personal effort, a conversion.

Progressing, changing something…The question, which is that of conversion and concerns every baptized person, is particularly relevant for remarried divorcees who want to receive Communion. What answers do you think the Church can provide?

Cardinal Vingt-Trois: For many divorced people who are in a second union, the first question is not that of Communion, but that of suffering, guilt, that they cannot express anywhere. They wonder: Why did my marriage fail? What is my responsibility? The first step is to shed light on it. Then, one can understand that for various reasons (note: in particular, children born of this second union), some cannot go back. The question then is: How does one live one’s baptism? When the divorced people who have remarried are baptized: how do they live their baptism? What means do they implement? The first step is not necessarily Communion. Divorced people who have remarried cannot receive communion because we cannot say we broke communion on one side and on the other, we are in communion. But this rift does not keep us from trying to live the grace of baptism. And it’s not because you cannot take Communion that you cannot progress towards holiness. There are many other ways: serving others, fighting for justice etc.

This article was translated from the French by Liliane Stevenson.