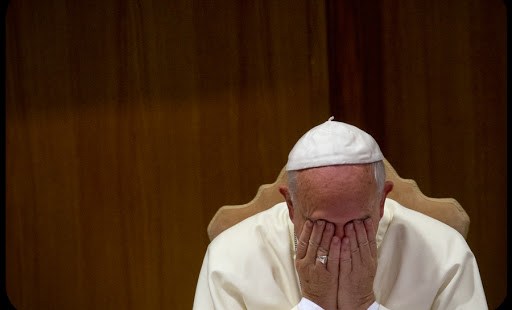 Are the media creating a tempest in a teapot?

Pope Francis is facing a firestorm of criticism after the release of a working document half way through the Synod of the Family.. The Relatio post disceptationem summarizes the debates which have taken place at the synod. In reflecting on the problems facing the institution of the family, the bishops and cardinals from around the world have echoed Francis’s themes of mercy and loving acceptance. However, some Catholics are alarmed at content of the report and their criticisms are increasingly aimed directly at Pope Francis himself.

Critics are concerned about the vague, secularist tone of the report, and its confusing messages about homosexuality, divorce and cohabitation. They are also worried about the methods of dispute, reporting and communication. Cardinal Raymond Burke has protested that the interventions of the individual synod fathers were not published as in the past. Instead, he felt the relatio expressed the predetermined views of those who propose revolutionary changes in church teachings. The document was published immediately, giving the impression that it was prepared beforehand.

It was Cardinal Burke’s impression that the document did not communicate the significant disapproval of the synod fathers, and he was even more damning about the content, saying, “The document lacks a solid foundation in the Sacred Scriptures and the Magisterium. In a matter on which the Church has a very rich and clear teaching, it gives the impression of inventing a totally new, what one Synod Father called “revolutionary”, teaching on marriage and the family. It invokes repeatedly and in a confused manner principles which are not defined, for example, the law of graduality.”

Pope Francis is accused of stacking the deck in his favor. Boston Globe reporter John Allen suggests that the Pope’s homily at Mass against legalistic attitudes and in favor of an openness to a “God of surprises” was a wink and a nod towards the release later that day of the controversial report. Allen reports that conservatives have dubbed the report “an earthquake,” a “disaster,” and a “ betrayal.”

Critics say Pope Francis prejudiced the discussions at the synod months ago by inviting liberal Cardinal Walter Kasper to address the extraordinary consistory of cardinals in February on the theme of the family. Religion New Service reports here on the close friendship between Pope Francis and Kasper. Those who are critical of the synod’s findings blame Francis for pre-empting the synod through his friendship and effusive praise for Kasper’s thinking on the family. At the February consistory, the pope said, “I read, or re-read, Cardinal Kasper’s remarks. I would like to thank him, because I found a deep theology, and serene thoughts in theology. It is nice to read serene theology. It did me well and I had an idea, and excuse me if I embarrass Your Eminence, but the idea is: This is called doing theology while kneeling. Thank you. Thank you.”

Cardinal Kasper seems to be the salesman for the pope’s views. Kasper provoked further controversy by touring the United States, giving high-profile interviews as if he were campaigning for acceptance of his and the pope’s opinions. Indeed, Kasper has not only called his critics “fundamentalists” but he has claimed that to disagree with him is to disagree with the pope. Meanwhile, Pope Francis has done nothing to distance himself from Kasper’s controversial and disturbing behavior. Kasper seems to revel in the controversy, saying that Francis is not a liberal, but a radical—and that he is determined to push through his reforms.

The pope is not only facing criticism for seeming to short-circuit the synod discussions by favoring Kasper, but eyebrows are being raised at his unprecedented interference in the process. The reports from a synod are usually written by cardinals elected by the synod fathers. The fathers chose some conservative members of the synod to write the reports that will come from this week’s small-group discussions, but Pope Francis stepped in and appointed six liberal cardinals to draft the final report. Those who are worried about the pope’s impartiality are also worried about what they see as his methods of manipulation.

In a few weeks, the firestorm over the Synod on the Family will die down, but as the process continues for another twelve months, Pope Francis will need to be aware of the increasing criticisms of his papacy. While all Catholics of goodwill want to love the pope and support the proper kind of renewal and reform, the Pope will have to tread carefully, listen to all points of view, communicate carefully and walk the tightrope between proper reform and defending the faith once delivered to the saints.

Fr. Dwight Longenecker is the parish priest of Our Lady of the Rosary Church in Greenville, South Carolina. Visit his blog, subscribe to his newsletter and listen to his radio show at dwightlongenecker.com