Neither Arson nor being Poisoned has Stopped this Intrepid Foundress 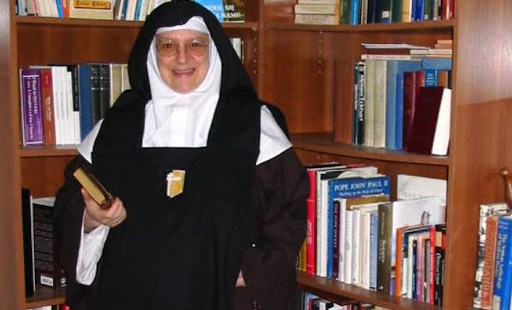 Mother Marija Benedykta of the Cross, OPC is leading a monastic order through some tough times.

Poisoning, arson, an intrepid religious sister making her way into the former Soviet Union — it sounds like the plot of a box office thriller, rather than the makings of a reformed religious order. But the story of the fledgling Paulicrucian community — like the beginning of so many religious orders — has been fraught with challenges and blessings, roadblocks and new opportunities.

Standing in the doorway of Br. Bosilkov Priory, Mother Marija Benedykta of the Cross, OPC, explains the “sign” that is attached to her habit. The sign in its final shield-like form, she says, will contain yellow for courage and red for the blood of the martyrs. And, indeed, the story that brings Mother Benedykta and her Paulicrucian order from its roots in Spain through Eastern Europe to its current home in Farmville, Virginia, is filled with acts of courage and of sacrifice.

Mother Benedykta is the foundress of the monastic Order of St. Paul of the Cross, also known as the Paulicrucians. They are a reformed branch of the Passionists, tracing their roots back to St. Paul of the Cross, an 18th century Italian mystic who felt called to proclaim God’s love for the world as manifested in the Passion of Jesus Christ. (His feast day is October 20 in the United States, elsewhere October 19).

The Passionists have a long history of forming new communities in response to God’s call. Mother Benedykta particularly looks to the Venerable Mother Magdalena Marcucci, CP, who was the foundress of two, and the mother of four, Passionist monasteries in Spain during the early 20th century. She states that Mother Magdalena’s writings on the mystical life and her spiritual journey are comparable to that of St. Teresa of Ávila.

When then-Sister Benedykta joined the Passionists in the early 1980s — first in a congregation in the United States and later in Madrid — she found that much of what attracted to her to monastic life was missing. She longed for a community that more closely lived out the spirituality of St. Paul of the Cross and that joyously followed monastic tradition.

At the root of what would eventually become her desire for a reformed order, she explains,

was the often spoken but never acted upon desire among many of the aging Passionist religious in their isolated autonomous monasteries to return in spirit and practice to the goals of their holy founder, St. Paul of the Cross, who desired from the beginning to found a religious Order on par with the Dominicans, Benedictine and Carmelites.

Not even a decade after Sister Benedykta joined the Passionists, the Berlin wall fell, and her desire for reform became linked with a heart for Catholics in the former U.S.S.R. Like St. Paul of the Cross, who so clearly heard Christ say “Follow Me,” Sister Benedykta left the community in Madrid to follow what she knew as Christ’s call to start a community in Eastern Europe.

Beginning in Paris, moving briefly to Prague, and officially separating from the Passionists to begin her reform, Sister Benedykta landed in Riga, Latvia. Having made her solemn vows under a Dominican (Cardinal Dominik Duka, OP), the sister who was now known as Mother Benedykta sought to nurture the fledgling Paulicrucians, considered a public association of the faithful.

Here’s where the story gets a bit harrowing.

Mother Benedykta was trying to establish a traditional monastic order — cloistered, focused on study and learning and centered in a deep spiritual life. Invitations went out across Latvia; dozens of young women expressed interested in beginning formation.

The Communists, however, had different plans.