Catholic Author Peter Kreeft: To Save Your Soul, You Must Opt Out of the “Culture of Death” 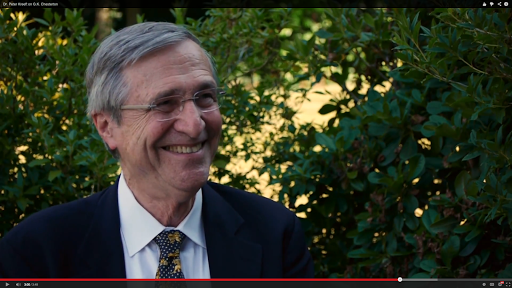 Boston College professor warns of eternal consequences of “going with the flow.”

“I should just always ask what God wants me to do and then do it. That’s all, isn’t it?” wondered a 6-year-old Peter Kreeft. A longtime Boston College philosophy professor, he cites this gift from God as his first “important conscious discovery.” Kreeft joined the BC faculty in 1965 and has written over 70 books, all building upon this first realization.
The circumstances of this pivotal moment are somewhat surprising, according to Kreeft. It was a Sunday after church with his parents, who raised him as a Dutch Calvinist. He eventually entered Calvin College in 1955.

General Protestant opinion on Catholicism was, and continues to be, less than positive, according to Kreeft.
“Most evangelical and fundamentalist Protestants think the Church is pagan idolatry, worshipping statues, saints, Mary, and the Pope,” he said. “They do not understand the concept of a sacrament, a sacred material thing.”

During college and graduate school, he investigated Catholic history. The historical claims of the Catholic Church convinced him to join what he sees as the true heir to the early Church and that of the saints he admires.

At his baptism, his new godmother made a joke about them falling in love. “Spiritual incest,” the priest warned, could only come of this. Two years later, a dispensation from the Vatican was required before he could marry his godmother.
Kreeft regards Protestants warmly, believing that Catholics can learn from them.

“I love to explore other religions, both for their wisdom and for the mysterious and complex question of how they are related to Christianity,” he said. “Buddhists typically have a profound spirituality despite a very unprofound theology, and Muslims grasp the greatness and majesty of God.”

Today, Kreeft believes atheism is probably the most prevalent alternative to Christianity, rather than another religion.
“Reading passionate atheists like Nietzsche and Sartre—not the shallow, recycled, talk-show-style cliches of the current crop of atheist media darlings—sets off Christianity powerfully, as death sets off life or night, day,” he said. Unlike the popular portrayals of faith by the New Atheism “media darlings,” Catholicism does stand up to intellectual debate, Kreeft said.

Protestant and atheist misconceptions of the Church parallel in at least one way, and Kreeft identifies the common root as misunderstanding of the sacred.

“Non-Christians almost always have a different problem [than Protestants] with the Church,” he said. “Its morality, especially its sexual morality. It is thought to be repressive, Puritanical, and impossibly idealistic. Here, too, the concept of the sacredness of something material is not understood. I think a serious study of the Theology of the Body by Pope John Paul II would be a powerful antidote to both misunderstandings.”

Kreeft does not align himself with others of his profession.

“I try to build bridges between ordinary people and scholars and philosophers,” he said. “Academia has always been a sort of scholarly ivory tower, but more so in modern times, with increasing specialization. In my own field, philosophy, I find that most ‘great books’ in philosophy were written for ordinary intelligent people, until the 20th century, when philosophers started to write for other philosophers. This is why they are ignored … I think God must love ordinary people best—that’s why He made so many of them.”

Kreeft positions himself opposite most intellectuals on the general direction of American morality.

“Let’s be very clear and candid,” he said. “It’s not an option to opt out of the culture of death, it’s a necessity for survival of your soul. The simplest way to lose your soul is to go with the flow because the flow is naturally down. Only live fish can swim against the current. Dead ones just conform to it.”

Kreeft identified abortion as the gravest moral evil that the “culture of death” promotes.

Secular society is no alternative to faith for Kreeft, either.

“I find it very significant that just about all the robustly Catholic students and teachers I know at BC are very happy and all the anti-Catholics are very unhappy and angry,” he said. “Deep happiness is a winsome and unanswerable argument.”

His antidote to depression: “Visit the Missionaries of Charity in Roxbury and see how deep and genuine joy is possible in the middle of the worst misery and poverty.”

Thomas Keenan writes for bcheights.com where this article was first published. It is reprinted with permission.