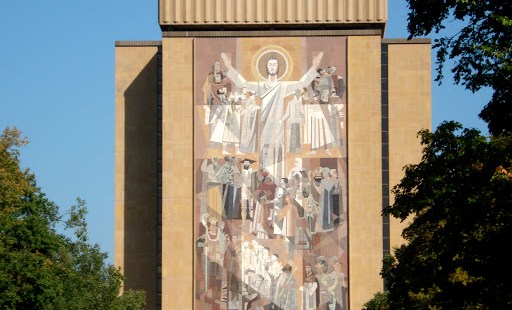 WASHINGTON – An orthodox Notre Dame professor gave out the email address of the school president publicly Tuesday night after the nation’s flagship Catholic university announced it would extend benefits to same-sex couples.

The Rev. Wison D. Miscamble, C.S.C., a professor of United States history at Notre Dame, urged one young alumni member in the audience at the Catholic Information Center to send an email to President John Jenkins, C.S.C. “Write directly to Father Jenkins. That’s the best person to write to. Now it’s not clear that he’s going to [respond]. If you write president@nd.edu, that goes to the staff. But get his own email address: johnjenkins@nd.edu,” Miscamble said, drawing nervous laughter from the crowd of three to four dozen.

Miscamble, 61, specializes in American diplomatic and foreign policy history and wrote an acclaimed book on U.S. strategist George Kennan.  For his hour-long lecture, Miscamble drew material from “For Notre Dame: Battling for the Heart and Soul of a Catholic University,” a collection of essays and reflections that criticize the school for failing to adhere to core Church teachings.

His book has generated interviews and stories in conservative and traditional Catholic media outlets, and news of his talk prompted several influential Catholics in Washington to head downtown on a rainy, cool evening.  The attendees included Father Arne Panula, director of the Catholic Information Center; Arina Grossu, director of the Center for Human Dignity at the Family Research Council; and John Gehring, Catholic program director at Faith in Public Life, a progressive religious nonprofit.

Notre Dame has drawn fire from traditional and conservative Catholics before. The school was condemned for allowing Eve Ensler’s play “The Vagina Monologues” to appear on campus in 2006 and for conferring an honorary degree on President Obama in 2009.

Miscamble’s critique represents the latest salvo from traditional Catholics. Last month, the Sycamore Trust, an alumni group, said the school’s health policy for faculty members covers artificial contraception, which the Church teaches is immoral. University officials have not commented on the report, but have appealed the mandate in the Affordable Care Act to the Supreme Court. Last week, Notre Dame announced that employees with legally married same-sex spouses would receive housing and benefits.

Pope Francis, too, has warned the school not to succumb to outside pressures and to adhere to a strong Catholic identity. At a meeting with Notre Dame representatives last month, the Pontiff reminded the officials they must defend the Church’s moral teachings. “It is my hope that the University of Notre Dame will continue to offer unambiguous testimony to this aspect of its foundational Catholic identity, especially in the face of efforts, from whatever quarter, to dilute that indispensable witness,” he said.

Miscamble blasted Notre Dame not only for its decisions on contraception and homosexuality, but also the school’s $450 million project to renovate and add buildings on campus. He contrasted the school with more orthodox Catholic universities such as the University of Dallas or Franciscan University in Steubenville, Ohio and compared it to Boston College and Fordham University. If the school continues to travel its secularist path, he warned, Notre Dame will become a “Catholic in name only” school such as Georgetown.

“The false gods attract powerful attention to the unwary and to those who fail to appreciate what matters. But if a Catholic university bows down before them, it will assuredly lose its heart and its soul,” Miscamble said. “It will lose its core identity regardless of what structures are erected and maintained to hide this loss. This course cannot be allowed to prevail at Notre Dame. It can’t be a place where there is a kind of a Catholic veneer over a largely secularist project.”