U.S. Doctor Reports on Ebola from the Front Lines in Africa

Dr. Tim Flanigan speaks of his motivation and the training he's giving in Africa

The Ebola epidemic has claimed more than 4,500 victims, mostly in Liberia and West Africa. One American doctor (who is also a deacon) on the ground in Monrovia is helping to bring the spread of the virus under control.

Dr. Timothy Flanigan is an infectious disease specialist at Brown University and a deacon at St. Christopher and St. Theresa parishes in Tiverton, Rhode Island. “Dr. Tim,” as he is called, took a leave of absence to work for two months with Caritas Internationalis, helping to train Liberian medical staff in the capital city of Monrovia in infection control and safe practices. 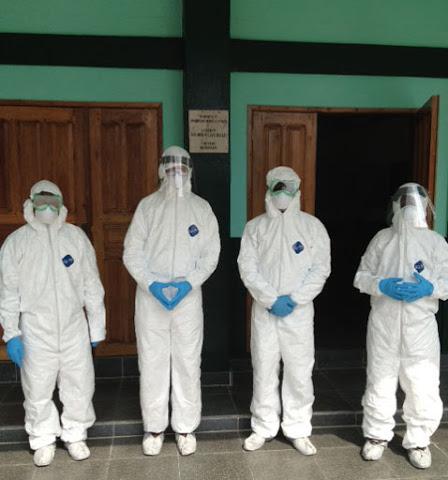 Dr. Flanigan’s commitment to helping the underserved has its roots in childhood. He was raised in a devout Catholic family, and one of his siblings is a religious sister. While studying in the undergraduate program at Dartmouth, he and friends from Aquinas House, Dartmouth’s Catholic student center, drove to The Bronx to meet Mother Teresa. Flanigan was greatly influenced by the saintly nun’s generosity and courage. She is his hero, he said, and his oldest daughter is named after her.

Dr. Flanigan’s medical career has been characterized by concern for people in need. At Brown Medical School, he helped to establish a network of primary care for HIV-infected individuals, focusing on women, substance abusers, and individuals leaving prison. His investigative work developing a combined therapy for opiate addiction and HIV has been recognized by the Robert Wood Johnson Foundation. At Salve Regina University, he received an honorary degree for his support of educational opportunities for children of incarcerated parents.

Now in Monrovia, Dr. Tim faces a new challenge: How to protect health care workers and stop the spread of Ebola in a nation in which the deadly disease has already claimed thousands of lives. Hand-washing stations, protective apparel and safe treatment protocols are all important in controlling the outbreak.

“One of the hardest things,” Dr. Tim explained, “is to train health care workers to provide ‘no-touch’ care.” The Liberian culture is warm and welcoming, and the typical greeting even between strangers is a hug and double-cheek kiss. For health care workers, the challenge is to show patients that their caregivers really do support and care for them, but to show them without actually touching. Among Liberians who fear the spread of disease, the customary greeting is now a proper bow from some distance away. 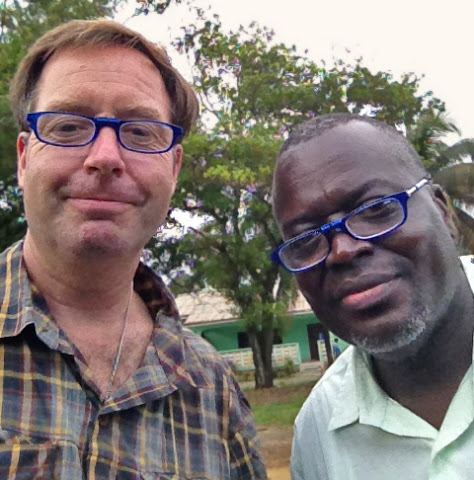 Tim with Dr Senga, who recovered from Ebola.

I talked with Dr. Flanigan via email earlier this month, asking about his experience on the ground in Monrovia and about his assessment of risk for Americans.

Some pundits have worried that this country may be unprepared to deal with the Ebola crisis on American soil. Dr. Tim, though, had words of praise for the Centers for Disease Control and Prevention (CDC), calling their efforts to screen relevant travelers and their on-line fact sheets and information “top-notch.”

Dr. Tim was optimistic that the disease will be brought under control in Liberia and other west African nations. “There are now more than 4,000 deaths,” he wrote, “but there will be an end to this outbreak.” There has been a tremendous community mobilization to warn the populace about how Ebola is spread, and to prevent further transmission. He noted that while Ebola causes brushfires in the communities in which it appears, many of those fires burn themselves out; so many of the communities that were hardest hit at first are now experiencing few infections.

Controlling infection is still a big challenge. According to Dr. Tim, “This virus is spread by sick individuals whose body fluids can be highly contagious, so family members taking care of their loved ones are at risk, as are health care workers and those dealing with soiled clothes from infected persons and dead bodies.” He downplayed media rumors of individuals having contracted the disease through family pets or wild animals, insisting that dogs