No Vaccine, One Plane and a “Booty”: Ebola Outbreak Would Catch U.S. Flatfooted, Witnesses Say 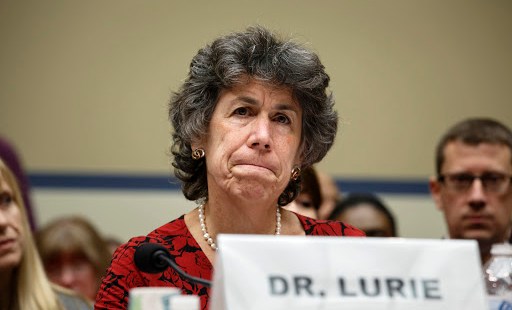 Nurses testify before congressional committee; Ebola czar is a no-show

WASHINGTON — Emergency room nurse Meredith Scannell said the only thing standing between her and the bodily fluids of an Ebola patient is a wafer thin, sky blue piece of cotton worn around the shoes and past the high ankle. She held the “booty” in her hand outside a congressional hearing on the federal response to the Ebola disease Friday, and she said it provides no protection from blood, water, or diarrhea.

Scannell belongs to the National Nurses United, whose co-president testified before members of the House Committee on Oversight and Government Reform. Around 30 union members attended the hearing with a cherry red sticker on their shirt or jacket that said “I Am Nina Pham,” a reference to the nurse who contracted Ebola while treating Thomas Eric Duncan at a hospital in Dallas. Pham hugged President Obama in the Oval Office Friday after being declared free of Ebola, but the nurses at the hearing expressed doubt that the federal government and hospital administrators would protect them in the event they treat an Ebola patient.

“They say the risk is low, the risk is low,” said Trish Powers, a nurse in the trauma unit at Brigham Hospital in Boston. “But if you’re a nurse, the risk is through the roof.” Powers travelled with members of the union’s Massachusetts chapter to D.C. to plead their case to lawmakers. A knot of nurses buttonholed Rep. Stephen Lynch (D-Mass) in the hallway after he questioned a witness in Room 2154 of the House Rayburn Building. “We’re nurses. We’re on the front line,” Karen Coughlin, a registered nurse at Taunton state psychiatric hospital in Taunton, Massachusetts, told Lynch.

Inside the committee room, nurses were not the only professionals that lawmakers expressed concern for. Members of the U.S. military who travel to west Africa to fight Ebola were too. Rep. Patrick McHenry (R-N.C.) told Assistant Secretary of Defense Michael D. Lumpkin that the military needs more airplanes to transport service members who get Ebola. “The idea that we have one airplane, which we control, which we have, raises great concern,” McHenry said.

Later at the hearing, Rep. Jim Jordan (R-Ohio) noted that ordinary Americans are not protected from the disease, as the country does not have a fully developed vaccine for Ebola. Nicole Lurie, an assistant secretary at the Department of Health and Human Services, said the country has “two vaccines in the safety-testing phase.”

Rep. Gerald E. Connolly (D-Va.) released a statement that said the Obama administration has had a “middling response” to Ebola. The statement said the administration was overconfident of “the ability of local hospitals to safely handle Ebola patients” and criticized “its initial rejection and subsequent gradual acceptance of travel restrictions and screening policies.”

Ron Klain, the new Ebola czar, declined to attend the hearing. In his place, Lurie spoke to the committee about the administration’s response. She said average citizens had reason for concern but not panic about contracting the disease. “There is an epidemic of fear, but not of Ebola, in the United States. We always can and do learn from experience, and we are making adjustments moving forward based on the first U.S. cases,” she said.

Three Americans have contracted Ebola this year. One died. The figures are a fraction of the 4,500 recorded deaths worldwide from the disease. Although nearly all of the cases of recorded deaths are in Liberia, Guinea, and Sierra Leone, the World Health Organization predicted that as many as 10,000 people a week in December could contract the disease.