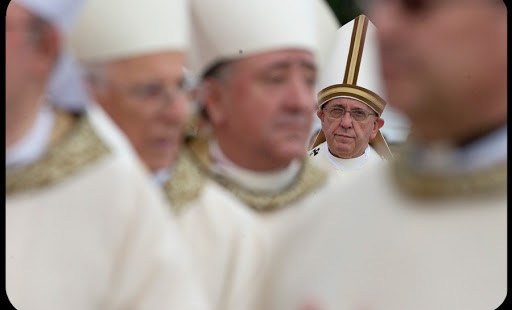 Do we have a dysfunctional relationship with our spiritual mother?

Pope Francis closed the Vatican’s Synod on the Family with a speech that was widely praised as masterful. In it, he summed up temptations Catholics have with regard to their faith, and proposed an answer: To treat the Church as a mother.

Ironically, I think the synod on the family reveals that just as our relationships with our families have become more dysfunctional, our relationship with Mother Church has as well. Let’s look at Pope Francis’ “five factional temptations” in terms of maternal relationships.

The first group, Francis said, suffers from a “temptation to hostile inflexibility … wanting to close oneself within the letter.” These reject the spirit of the law and cling to the letter.

For Catholics tempted this way, the Church is a micromanaging mother. Mother tells me what path I should take, then makes sure I stay on it. This mother replaces my freedom with her direction and my conscience with her rules. We were not made to be robots programmed by God, or the Church, or our parents, but free people seeking God’s will.

The temptation of the second group, which Francis identified as “progressives and liberals” is to “a destructive tendency to goodness.” This group “binds the wounds without first curing them and treating them” and “treats the symptoms and not the causes and the roots.”

For these Catholics, the Church is the “best friend” mom who above all else wants you to like her. For this Mom, the sinner must not be challenged or questioned or bothered in any way, but allowed to do as he pleases. The mom dare not threaten the emotional attachment she wants with the child, and, so, refuses to acknowledge sins.

It seems the most dysfunctional of all is his third group. He talks about “The temptation to transform stones into bread to break the long, heavy, and painful fast; and also to transform the bread into a stone and cast it against the sinners.”  He seems to see two tendencies as opposite sides of the same coin: The tendency to be hyper-critical on the one hand, and the tendency to refuse to engage, on the other.

His fourth temptation is “the temptation to come down off the Cross, to please the people, and not stay there, in order to fulfil the will of the Father; to bow down to a worldly spirit instead of purifying it and bending it to the Spirit of God.”

This makes the Church the kind of Pushover Mom whose spirit is willing but whose flesh is weak. She knows what her children need to do, but she doesn’t have the heart to confront their weakness in order to make sure they do it. This mom is forever making excuses for herself and for her children.

Francis’s next temptation is to “neglect the deposit of faith … to neglect reality, making use of meticulous language and smooth-talk to say so many things and to say nothing!”

If the previous mother knows the truth but won’t suffer for it; this one refuses the truth itself. She is the “Cool" Mom. She will tell you that her children need to make their own decisions, wear what they want, go out when they want and come home when they want. You see these moms in the news when they host alcohol-fueled parties for their teens and get busted.