Cardinal Burke: “I Don’t Ever Put Myself in Opposition to the Successor of St. Peter” 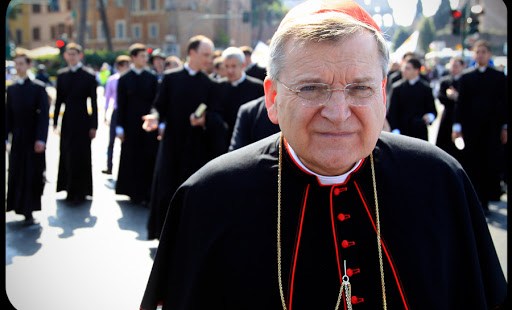 Is the Catholic Church drifting from its traditional teachings on life, love, marriage and sexuality?

Cardinal Raymond Burke, who heads the Church’s highest court at the Vatican, has been warning of attempts by members of the Synod of Bishops to change the Church’s unchanging truths. In spite of recent media reports suggesting he is leading the "conservative opposition" to Pope Francis’ "reformist agenda," the American cardinal insists on his fidelity to the Pope as Vicar of Christ and Successor to St. Peter.

Cardinal Burke was in Vienna, Austria this week for the launch of the German translation of a new book  to which he contributed, Remaining in the Truth of Christ. The book is the collaborative work of five cardinals from Germany, Italy, and the United States. It is a response to Cardinal Walter Kasper’s address at the Extraordinary Consistory in February of this year, in which he proposed allowing some "remarried" divorcees to have access to Holy Communion.

Tuesday’s launch at the parish house of Vienna’s Karlskirche brought together representatives from the Cistercian Abbey of Heiligenkreuz, the German speaking academic world, and Una Voce Austria.

Aleteia’s Rome correspondent and another reporter sat down with Cardinal Burke to discuss new accusations that he’s been critical of Pope Francis, Elton John’s praise of the Pope, and how he sees the Synodal process over the coming year.

Your Eminence, you said in your recent interview with Vida Nueva that you have a strong sense the Church is like a ship “without a helm.” Some observers are seeing statements like this as an insult against the Pope. Would you like to correct this?

Yes, I would love to. The fact of the matter is the interviewer simply asked me the question: there are many people who are confused at this point, and I think he used the image, or I did, that people on the ship of the Church, because of this confusion, are feeling some sea sickness. Many people are anxious and concerned and many people have been in contact with me. They say, “Where are we going? What is the Church really teaching?” And my response to them has always been that we know the Church’s teaching, it’s in the Catechism, it’s in the Tradition, and we simply have to cling to that, and with that we know we’re going to do the right thing.

I wasn’t in any way commenting directly on the Holy Father, and it’s unfortunate that people are using that. But certain media simply want to keep portraying me as living my life as an opponent to Pope Francis, which I’m not at all. I’ve been serving him in the Apostolic Signatura and in other ways I continue to serve him. And I know that part of my service is to speak the truth about situations, and we simply are in a situation right now in the Church where many people are confused.

In the Pope’s speech at the end of the Synod he spoke about defending the deposit of faith. Is that what you’d like to stress?

That’s all that I’m about. And I made it very clear in my response to [the interviewer] that I did not say that this was what the Holy Father is causing or doing but simply a reality today.

And you also said in that interview that we cannot go to the peripheries empty-handed. Do you want to explain that more?

Many people, I believe, are misinterpreting the Holy Father’s emphasis on going to the peripheries as a kind of chasing after the culture. In other words, that somehow we no longer have confidence in the teaching of the Faith and in the life of the Church, and so we go after those very deficient situations in society as if we have nothing to offer, and nothing to say.

The point I was making is that, yes, we go out to the peripheries, but we go there with Jesus Christ and all the richness of his life with us in the Church. That’s how we really serve those who are on the peripheries, those who are looking for some sign of God’s mercy in their lives, God’s truth. So it’s very important when we go out to the periphery that we go there with the integrity of our Catholic faith.

I also made it clear in the interview that I wasn’t saying that the Holy Father’s idea is this, but I’ve seen other people using his words to justify a kind of accommodation of the faith to culture which can never be.