Cardinal Burke Removed as Head of Vatican’s Highest Court: Becomes Patron of the Order of Malta 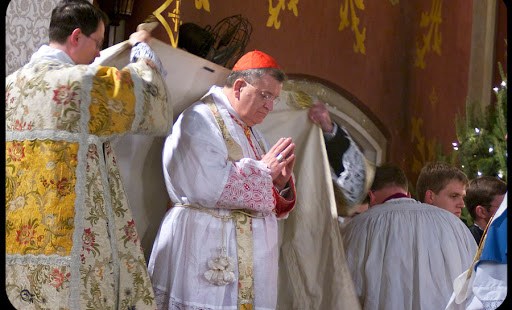 The Holy See today confirmed that Pope Francis has transferred Cardinal Raymond Burke from his position as Prefect of the Apostolic Signatura, nominating him to be Patron of the Sovereign Military Order of Malta, which has elected him to that position.

He has been replaced at the Vatican’s highest court by Moroccan Archbishop Dominique Mamberti, until now the Vatican Secretary for Relations with States.

Confirmation of Cardinal Burke’s removal from the Apostolic Signatura was highly anticipated. Burke in fact disclosed the Pope’s decision himself, in an interview last month. Cardinal Burke now is removed from the Roman Curia and from any position of governance in the Church.

The Malta appointment is a purely honorary position normally given to retired cardinals or is held by cardinals exercising an office of governance elsewhere in the Church.

Given Cardinal Burke’s age (66) and expertise, many observers regard it as a demotion. Some have speculated it is the result of Cardinal Burke’s outspoken criticism of how the controversial October synod on the family was run, yet rumors of the re-appointment were already swirling in mid-September.

Despite his open criticism of the handling of the recent Synod, the American cardinal has insisted on his fidelity to Pope Francis as Successor of Peter, and has stated that his whole purpose in speaking out has been and is to clear up confusion among the faithful regarding the Church’s teaching and Magisterium in the synod’s aftermath.

Cardinal Burke’s new appointment is Rome-based. It is therefore expected that the new position will allow him to intensify his efforts to present the Church’s teaching, especially on matters of marriage and the family, in anticipation of the upcoming Ordinary Synod on the Family next October.

Today’s announcement was published in Italian in the Holy See’s daily bulletin. It reads as follows:

"The Holy Father has appointed Patron of the Sovereign Military Order of Malta, His Eminence Cardinal Raymond Leo Burke, until now Prefect of the Supreme Tribunal of the Apostolic Signatura.

"The Pope has appointed Prefect of the Supreme Tribunal of the Apostolic Signatura, His Excellency Dominique Mamberti, titular Archbishop of Sagona, until now Secretary for Relations with States.

"The Holy Father has appointed Secretary for Relations with States His Excellency Paul Richard Gallagher, titular Archbishop of Hodelm, until now Apostolic Nuncio of Australia."