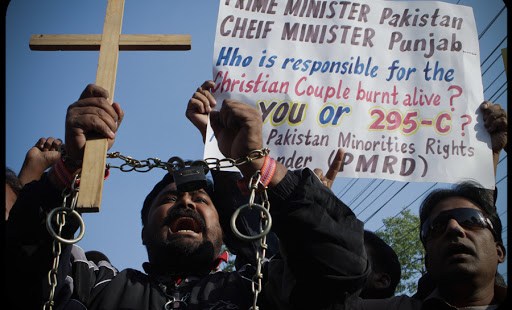 In the wake of gruesome news that a young Pakistani couple were burned alive by an angry crowd for allegedly desecrating the Islamic holy book, there are stronger calls for international pressure on Pakistan to get rid of its “blasphemy law.”

According to reports, Shahzad Masih, 26, and Shama Masih, 24, who was four months pregnant, were kidnapped and held hostage by a Muslim mob near Lahore in Punjab province. Shama allegedly burned pages from the Quran. On Tuesday morning, they were pushed into a brick kiln, where they perished in the fire. The couple’s lawyer, Sardar Mushtaq Gill, a human rights defender, told Fides, the news agency of the Pontifical Mission Societies, that local Christians called the police, who intervened and arrested 35 people. But they could not save the couple.

It is the second high-profile case in less than a month in which the 30-year-old blasphemy laws were invoked. On Oct. 16, the Lahore High Court upheld a death sentence for Asia Bibi, a Christian mother of five, who was accused of insulting the Prophet Muhammad. She is the first woman condemned to death for blasphemy in Pakistan.

“The sad truth is that blasphemy laws have been the cause of too much violence,” said Chris Smith, chairman of the House Foreign Affairs Committee’s subcommittee on human rights. “I welcome Prime Minister Sharif’s statement that the burning alive of a Christian couple this week was ‘an unacceptable crime’ and the recent arrest of 50 people in this case.  The Prime Minister has pledged that Pakistan will ‘act proactively to protect its minorities from violence and injustice,’ so we look forward to concrete action by his government,  including the full repeal of Pakistan’s blasphemy law and justice for those who have suffered because of this law. Three years after the assassination Shahbaz Bhatti, the Christian Minister for Minority Affairs, those responsible have still not been brought to justice, and Asia Bibi remains in prison, sentenced to death, after she was accused of blasphemy in a local dispute over property damage and water use."

“International pressure to reform and eventually eliminate Pakistan’s dangerous blasphemy law — which inflames feelings of religious offense and legitimizes death and harsh punishment for those accused of blasphemy — is needed,” said Nina Shea, a leading American religious freedom expert. “Since the 2011 assassinations of Minorities Minister Shahbaz Bhatti and Punjab Governor Salman Taseer for criticizing the blasphemy law, no political figure in Pakistan dare raise his voice.  The blasphemy law has become a license to kill.”

Shea, director of the Center for Religious Freedom at the Hudson Institute, is co-author of Silenced: How Apostasy and Blasphemy Codes Are Choking Freedom Worldwide.

Amnesty International has also spoken out against the law after this week’s killing.

"The Pakistani authorities must bring to justice those responsible for the killing of the Christian couple accused of blasphemy," remarked David Griffiths, Deputy Director of Asia-Pacific of Amnesty International, in a note sent to Fides. "A mere accusation of blasphemy is often enough to put a person or an entire community in danger. In this case, the crowd seems to have acted as judge, jury and executioner."

According to Amnesty International, "the blasphemy laws violate the norms of international law and human rights and must be reformed urgently, providing an effective safeguard against their abuse, up to a possible abrogation. The lack of coherence on behalf of the government in dealing with the violence carried out in the name of religion sends the message that one can commit outrageous abuses, justifying them as a defense of religious sentiments."

In a recent article in The Weekly Standard, Shea said that under the blasphemy law, "the flimsiest rumor of a Koran burning can spark hysteria ending in riots against entire Christian communities."

Gill explained that Shama Masih was cleaning the house of her recently-deceased father in law, burning some personal items, including sheets of paper she considered useless. A Muslim man witnessed the action and claimed that pages of the Quran were among the papers burned. He spread the word in the surrounding villages, and a crowd of over 100 people took the two young people hostage.