My Wife Started Wearing a Veil to Mass 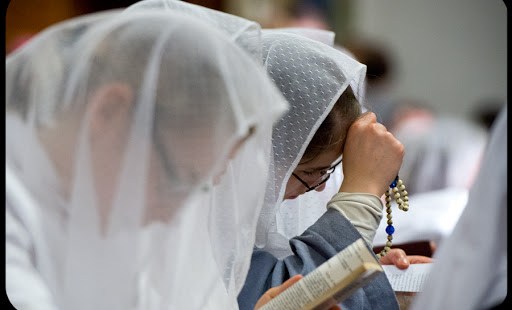 She’s a reminder of the sacredness of women.

The strangest thing happened a few months ago. My wife covered her head during Mass. I’ll never forget the moment when I first glanced up to see her noble cranium veiled in a strange and beautiful cut of lace. Whoa.

Years earlier, my good friend Sam (the man behind the wheel of this Catholic Gentleman rig) had the same experience. One day he looks up from his prayers and…whoa. His bride’s head — the land of the free, the home of the brave — is covered over in nothing less than that medieval throwback, the mantilla.

What should a Catholic man do when his wife starts wearing a chapel veil? What will people say? What if people in the neighboring pew think you’re a misogynist pig? What if the aging nuns, the ones who worked so hard to get out of the habit, throw you nasty glares during the passing of the peace? They know all about fellas like you. Head coverings can be as dangerous a subject for men as women, and so it’s a good idea to know what they’re all about.

You’ve probably heard it before. Chapel veils are the sexist leftovers of a chauvinistic Church, St. Paul was blinded by his bigoted culture, yadda yadda. The women who cover their heads during worship probably have husbands who think they ought always to be pregnant, barefoot, and in the kitchen. No one will come out and say it straight, but the social bubble that will suddenly surround your family sends the message: you are a nasty, brutish caveman, and if your wife were not so submissive and weak she’d leave you faster than you can say “First Corinthians Eleven.”

But this is the thing that every Catholic husband and father needs to remember: being pregnant is awesome, and so is cooking — more awesome than your so-called “career.” Blessed are they who get to make a home in cities all too familiar with homelessness, who get to prepare delicious food in a nation of fast food, who get to bear little men and women made in the image of God, made to bring glory to the most adorable Trinity.

How can you — a mere male who will never experience first-hand stretch marks or dizzy spells or how generally miserable and disturbing and awful pregnancy can be — claim that being pregnant is awesome? Because of the Blessed Virgin Mary. Because God sanctified a womb in Nazareth. Now, no one wants to belittle or disregard the difficulty of pregnancy with a tidy theological quip, but the reason why pregnancy is awesome is because the eternal Son of God became a Son of Adam, born of a daughter of Eve. Because Mary is the sign of the Church, the Bride of Christ, and because every single woman is also a sign.

Some signs are cheap and disposable, like the Banana Republic ads that suggest that a briefcase is power, that having a family is a threat to personhood, that you should look as thin and edible as a Slim Jim. But other signs are woven into the very fabric of the universe, inviolate and inviolable, and a woman is such a sign. The Blessed Virgin Mary reminds us that a mother does not “make” a home. A mother is home. Eve is the height of creation because she is a prophecy of the New Eve, the Mother of the Church, the Virgin Mary — and in all her statues and icons, Mary is wearing a veil.

And you need to know why. Because when the angry accusations get hurtled at you or your better half, as important as it is to be gentle, it’s also important to speak the truth in love. When it comes to chapel veils, it’s only too easy to forget the forest for the trees. But head coverings only make sense in light of the big picture of sin and clothing and the dignity of the human person.