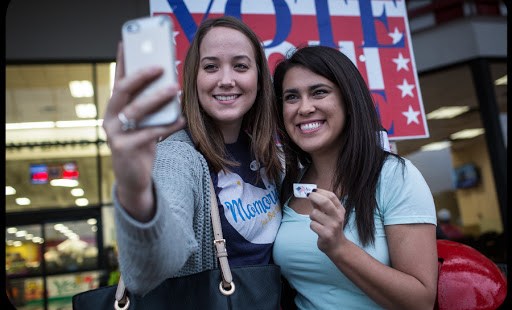 The extra clout in the voting booth comes as the Church faces challenges to its authority.

WASHINGTON — White Catholic voters have gone through many transformations over the last half century, from died-in-the wool Democrats to ticket-splitting Reagan Democrats to dependable Republicans. In the elections last Tuesday, they went through a change less political than demographic: They were the fastest growing segment not only among those who identify with a religious denomination but also those who don’t.

According to Pew Research, the share of white Catholic voters rose from 17 percent four years ago to 19 percent. The gain of two percentage points was larger than for Protestants, white Protestants, Catholics as a whole, Jews, religious minorities, and secular or non-religious voters.

Overall, at 19 percent, white Catholics made up nearly as large a slice of the religious and non-religious electorate as secular and religious minorities combined at 20 percent.

Catholic voters overall made up a larger part of the electorate Tuesday, at 24 percent. The number is an increase of one percentage point from 2010.

The extra clout in the voting booth comes as the Catholic Church faces declines in many of its pews and challenges to its authority over its schools, civic groups, and hospitals. More and more Catholic parishes in the white-ethnic bastions in the Northeast have closed and Catholic bishops and university leaders have fought the contraception mandate in the Affordable Care Act, or Obamacare. Catholics faced different challenges when 78 percent of them voted for John F. Kennedy for president in 1960 and a majority voted for Ronald Reagan in 1980 and 1984.

For political handicappers and politicians, the results of the exit polls raise a question: Was the increase little more than a statistical outlier or anomaly?

Geoff Skelley, associate editor of Sabato’s Crystall Ball, a political handicapping website, said the two-percentage point gain from 2010 may represent a temporary blip. He noted that white voters represent a larger share of the electorate in congressional mid-term elections than in presidential elections and with more and more states using early balloting, pollsters may have struggled to tally the voting pool accurately. “If it did go up, we shouldn’t read too much into it,” Skelley said.

The Pew Research poll revealed a changed denominational landscape. Protestants and white Protestants saw their numbers fall by several percentage points. The share of religious minorities and “nones” remained the same. And of the seven religious groups, Jews were the other group whose share of the electorate rose from 2010, at one percentage point.

Still, Protestants remain the largest religious denomination. They represented more than half (53 percent) of voters this fall.