Saint Martin of Tours, Who Raised Three People from the Dead 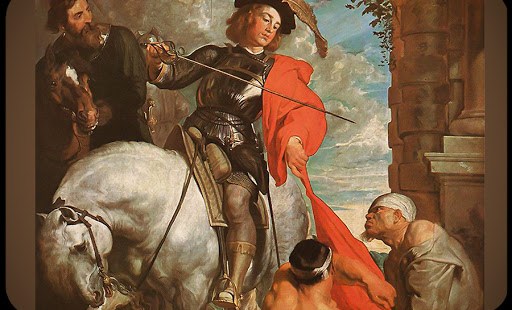 A prodigious miracle-worker in life and in death

It is a happy coincidence that Veteran’s Day falls on the feast day of St. Martin of Tours, patron of soldiers (among other occupations).

But there’s also a certain irony in this patronage. Martin was conscripted against his will into the Roman army at age 15 (under an edict that the sons of Roman soldiers also had to serve). He took the oath seriously and served as an officer in a unit whose duties were largely ceremonial, but several years later, after his baptism, Martin concluded on the eve of battle that he could not take part in the bloodshed, telling Caesar Julian (“the Apostate”): “I am a soldier of Christ. It is not lawful for me to fight.”

St. Martin is certainly best known for having cut in two pieces his lambswool-lined cavalryman’s cloak to give half to a nearly naked beggar outside the gates of Amiens where Martin was stationed. He would probably have given the man his whole cloak but for the fact that Martin, too, was nearly naked, having already given away much of his own clothing to those in need.

From his friend, disciple and biographer, Sulpicius Severus, we know a great many details of Martin’s life (316 – 397) – his birth in what is now Hungary, his pagan parents, his childhood in Pavia, Italy (where his soldier, later tribune, father was stationed), his desire from at least the age of ten to become a Christian, his founding of the oldest monastery in Europe, his unparalleled humility and charity, his conversion of thousands of pagans, and astonishing miracles which earned him the reputation of being a saint even during his life. These details can be found on many websites.

Less well known, perhaps, are some of the more spectacular miracles that God worked through the intercession of Saint Martin of Tours – raising three people from the dead, for example. Also remarkable was Martin’s success in bringing about the reconciliation of feuding groups, both bishops and monks.

First, to the miracles. According to Sulpicius’ account (portions of which are included in translation in “Medieval Saints: A Reader,” edited by Mary-Ann Stouck [1999]), not long after St. Martin established a monastery in Ligugé (five miles south of Poitiers), a catechumen joined the monks in Ligugé for instruction in the faith. While St. Martin was away traveling for three days, the unbaptised catechumen came down with a high fever and died. His body lay lifeless in one of the cells, awaiting burial. Martin, Sulpicius reports,

stretched himself at full length on the dead limbs of his departed brother. After he had stayed lying there some time in prayer, and had become aware through the Spirit that the power of God was present, he rose up for a short time, and fixing his gaze on the dead man’s face he waited with confidence for the result of his prayer and the mercy of the Lord. And after scarcely two hours had passed he saw the dead man begin to move all his limbs little by little, and his eyes trembling and blinking as he recovered his sight.

The other monks were naturally astounded, perhaps even more so when the catechumen (who’d been baptized immediately after his return to life) recounted what had occurred after his death:

when he left the body, he was brought before the tribunal of the Judge [God], and had a dismal sentenced pronounced on him which relegated him to the dark places among the crowd of common men. Then, however, he added, it was suggested by two angels of the Judge that he was the man for whom Martin was praying; and so the same angels were ordered to lead him back and to give him to Martin, and restore him to his former life.