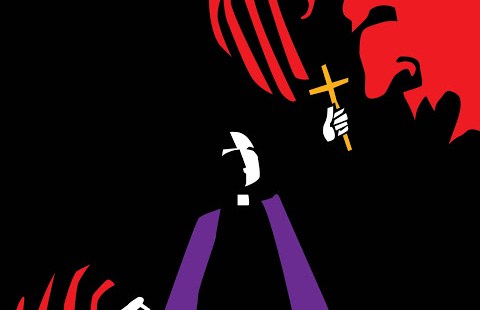 USCCB votes on new “manual,” but without Latin on the side.

The bishops of the United States have approved publication of the first ever official English translation of the ritual book, “Exorcisms and Related Supplications.”

The proposal passed by 179 votes to 5 Tuesday. The translation now needs a "recognitio" of the Vatican’s Congregation for Divine Worship and Discipline of the Sacraments.

Revised after the Second Vatican Council, the exorcism ritual was promulgated in Latin in 1999 with an amended version in 2004. According to the Committe for Divine Worship, the main part of this book is the rite of major exorcism and includes an introduction outlining criteria for its use, which is always the decision of the bishop alone. While this text affirms the reality of evil in the world, it even more so affirms the sovereignty of Christ to overcome any and all evil.

Some of the changes in the new translation seem minor, such as using the spelling Zion rather than Sion. The phrase "rise up to help me" was altered to "arise in my defense."

The vote was one of five liturgy-related items taken up at the Fall General Assembly of the U.S. Conference of Catholic Bishops, November 10-13, in Baltimore. The other items, presented by the Committee on Divine Worship, included revisions to the liturgy of the hours and a revision of guidelines for the celebration of the sacraments with persons with disabilities.

Just prior to the vote, Bishop Jaime Soto of Sacramento, California asked if the ritual would be published with the original Latin. Bishop Serratelli said it would not be.

One exorcist, who spoke on condition of anonymity due to the nature of his work, said that having the rite in English "will be a nice tool for those of us whose Latin is not up to snuff."

"I think many exorcists will stick with the Latin translation," he added. "There is some belief among exorcists that the Latin prayers are more effective in driving out demons. However, as more and more priests are getting into this ministry, working in the English language with an official translation can be very helpful for us."