“Dumb and Dumber To” 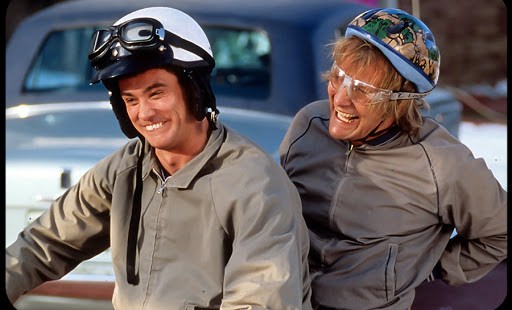 Harry and Loyd are up to their same old tricks.

November has been quite the month for eggheads at the movies, hasn’t it? Christopher Nolan’s “Interstellar” has finally arrived, and although it’s fatally flawed, it’s still by far full of more big ideas than most every other movie this year. Then there’s “Big Hero 6,” Disney’s latest animated feature which, while not lacking in the superheroics, has a story that tends to favor brains over brawn. And now, to continue November’s trend of movies made for Mensa members, Hollywood is offering us… “Dumb and Dumber To.”

Well, that was a pretty short lived trend, wasn’t it?

“Dumb and Dumber To” is, of course, the long awaited sequel to “Dumb and Dumber.” You remember that movie, don’t you, the 1994 hit about two good natured morons who go on a road trip to track down a woman they know nothing about? Remember how, before they left, Harry (Jeff Daniels) and Loyd (Jim Carrey) accidentally made things miserable for the blind kid who lived downstairs? And surely you haven’t forgotten how the pair unwittingly upset some criminal types, who then pursued Harry and Loyd in order to knock them off? And, of course, there’s the scene where the guys have to find new clothes and end up dressed in something inappropriate and silly. You remember that, don’t you?

Good, because now I don’t have to provide you a synopsis for “Dumb and Dumber To,” as everything I just described (and some other stuff I didn’t) happens all over again in this film in pretty much the same order as the original.

Oh, okay, there are some differences between the two movies. Not a whole lot, mind you, but there are some. For instance, this time around, the mystery woman in question is the daughter whom Harry never knew he had. In need of a compatible kidney for a transplant, Harry and his best pal Loyd take to the road to find the girl’s whereabouts so she can donate one. Stupid things happen.

Look, there’s not a lot of reason to delve very deep into the plot of “Dumb and Dumber To.” Like its predecessor (the original, not the prequel, which we’ll completely ignore here just as much as audiences did when it was released), this second go around for Harry and Loyd is an episodic affair designed to do little more than put the two luckless losers into various situations where their cluelessness causes havoc for everyone else in the area.

In that modest goal, the film succeeds. Jim Carrey and Jeff Daniels still make a good comedic team, though it’s obvious Carrey is more comfortable returning to the role of goofball than today’s more serious Daniels appears to be. They’re joined by a few new faces, most notably Kathleen Turner, temporarily on loan from stage acting (where Hollywood banishes most of its actresses over the age of 50), and a relative newcomer to the big screen, Rachel Melvin, fresh off her role in this year’s zombie beaver movie, “Zombeavers” (that’s a real movie, look it up, I’m not lying).

A lot of the jokes work, even when they’re just retreads of ones from the first movie. There’s one scene involving an address on an envelope that still has me smiling. And the Farrelly Brothers, who return for directing and writing duties, remain unafraid to venture into politically incorrect territory. Along with the aforementioned blind character from the first film, a Stephen Hawking stand-in also gets a few good natured shots taken at him. So, if you’re a fan of the first “Dumb and Dumber,” there’s no reason you shouldn’t be satisfied with this one.

That being said, “Dumb and Dumber To” is a step down in a number of respects. For every joke that works, there’s one that doesn’t. This movie is a much more hit-or-miss affair than the first film. Worse yet, a few of the gags are much cruder than anything found in the original, something I imagine came as quite a shock to all those folks who brought their elementary school-aged children to the screening to show them what their parents used to find funny back in the day.