Troubadour for Jesus: An Interview with John Michael Talbot

What is it like to be the spiritual father of a religious community, and what have been your most important lessons to date?

It comes naturally. People are attracted to your ministry, and seek your input and support. Some want to come and live the lifestyle with you. A community is formed, much like a child that is birthed. At that point you simply become a spiritual father or mother. The analogy of the spiritual father or mother is not meant to be a sign of excessive control that can border on abuse. I like what Pope Francis is saying about this kind of relationship. He calls spiritual directors and such, ”companions." That’s really what spiritual direction is–walking with people along the way their spiritual journey.

You’ve had a huge impact on many people over the years. What’s the most rewarding part of the ministry you do?

The most rewarding is hearing about stories of conversion and healing. This is especially cool with the advent of things like Facebook and other social media. Nowadays I hear a lot from folks who were literally saved from death by listening to my music, reading a book, seeing a TV show, coming to a live ministry event. I’m always left a bit stunned by such testimonies. I mean, after all, I just make my little songs for God, and write books based upon the little bit I have discovered in my spiritual journey. It is truly an act of grace when I hear such testimonies. Lately, I’ve been hearing how people will play my music as a loved one passes away. This always reduces me to Jell-O.

Simply put, Jesus! I consider him the master of masters, guru of gurus, king of kings and Lord of lords. After that would come the great monastic saints. And when they don’t inspire me I can always count on St. Francis of Assisi to give me the spiritual boost I need. I love the Catholic and Eastern tradition of venerating the saints. When I read and meditate on the lives of the saints I’m always left encouraged that if they could get radical for Christ, maybe I can too.

I understand the Jesus Prayer is big in your life and you encourage people to pray it. Can you tell me more about what it is and why you love it so much?

It is a way to unite the name and person of Jesus with every breath you take: “Lord, Jesus Christ, Son of God, have mercy on me, a sinner.” Each of those words is highly significant and revelatory in our spiritual journey in Christ. I have written a book on it called The Jesus Prayer and included it in the chapter of my newest book, Nothing Is Impossible With God.

There is often a chasm today between people with religious faith and those who may consider themselves "spiritual" but not part of any religion or church. How can theycome together better to make the world a more just and peaceful place?

I think it’s a mistake to separate spirituality and religion too much. Religion without lively spirituality is dead on its feet. But spirituality without a religion that places its feet firmly on planet Earth is not fully incarnational. It’s like a bird that needs wings to soar to the heavens. We need both.

You have a very long beard, which may remind people of the guys on Duck Dynasty, an A&E reality show. Can you share a little bit about your decision to grow such a long beard?

Well, I’m more of a believer in “Monk" Dynasty then I am in Duck Dynasty! (Laughter.) Seriously, the monastic tradition is far older and more venerable — and their beards are longer! The monastics in early Christianity grew their beards and hair after the time of their profession. Many never cut it again. I grew mine out over an extended period of time and prayerful reclusion. It’s just easier, and it also symbolized some of the growth I was experiencing internally. I decided to leave my hair and beard long, and was delightfully surprised that there was a new show on the air called Duck Dynasty. It’s kind of become a joke since then, but it’s a great way to kick off a mission: I assure audiences that Moses has not come to their parish, nor Gandolf, nor the guys from Duck Dynasty. It usually gets quite a laugh.

What might people be surprised to know about you?

Let’s see… I like good rock as well as chant and classical music. And I like a good movie. I also use social media to minister to millions who do not buy my spiritual resources or come to my ministry events. Because of the meditative style of much of my music, many folks think I kind of float around on a cloud. I hope I’m prayerful, but I’m actually a pretty goofy guy. After my time in greater reclusion, it’s as if all of the masks came off, and I was unafraid to just call myself a goof for God. I sometimes say that John Michael Talbot has died, so that I can discover who I really am in Christ. The old persona has pretty much been dropped so I’m pretty relaxed now. I’m actually happier than I have ever been, and I’m having a blast in this chapter of my life. 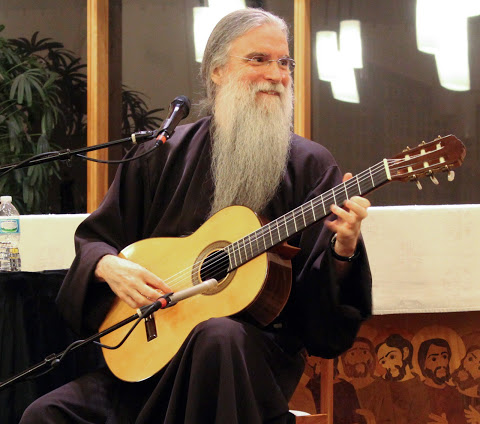