British Rabbi Tells Vatican Conference We Must Defend the Family of “Man, Woman and Child” 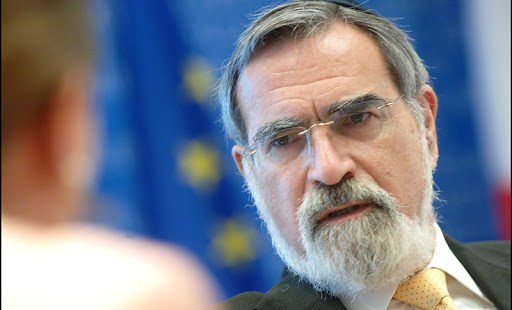 Today in the New Synod Hall in Vatican City, Rabbi Lord Jonathan Sacks addressed presenters and participants at Humanum, a Colloquium on the Complementarity of Man and Woman in Marriage.

Rabbi Lord Sacks served as the chief rabbi of the United Hebrew Congregations of the British Commonwealth. He is currently the Ingeborg and Ira Rennert Global Distinguished Professor of Judaic Thought at New York University and the Kressel and Ephrat Family University Professor of Jewish Thought at Yeshiva University. He has also been appointed as Professor of Law, Ethics and the Bible at King’s College, London.

Rabbi Lord Sacks’ address received a standing ovation from the colloquium’s 350 participants. Here we publish the text in full:

I want this morning to begin our conversation by one way of telling the story of the most beautiful idea in the history of civilization: the idea of the love that brings new life into the world. There are of course many ways of telling the story, and this is just one. But to me it is a story of seven key moments, each of them surprising and unexpected.

The first, according to a report in the press on 20th October of this year, took place in a lake in Scotland 385 million years ago. It was then, according to this new discovery, that two fish came together to perform the first instance of sexual reproduction known to science. Until then all life had propagated itself asexually, by cell division, budding, fragmentation or parthenogenesis, all of which are far simpler and more economical than the division of life into male and female, each with a different role in creating and sustaining life.

When we consider, even in the animal kingdom, how much effort and energy the coming together of male and female takes, in terms of displays, courtship rituals, rivalries and violence, it is astonishing that sexual reproduction ever happened at all. Biologists are still not quite sure why it did. Some say to offer protection against parasites, or immunities against disease. Others say it’s simply that the meeting of opposites generates diversity. But one way or another, the fish in Scotland discovered something new and beautiful that’s been copied ever since by virtually all advanced forms of life. Life begins when male and female meet and embrace.

The second unexpected development was the unique challenge posed to Homo sapiens by two factors: we stood upright, which constricted the female pelvis, and we had bigger brains — a 300 per cent increase — which meant larger heads. The result was that human babies had to be born more prematurely than any other species, and so needed parental protection for much longer. This made parenting more demanding among humans than any other species, the work of two people rather than one. Hence the very rare phenomenon among mammals, of pair bonding, unlike other species where the male contribution tends to end with the act of impregnation. Among most primates, fathers don’t even recognise their children let alone care for them.

Elsewhere in the animal kingdom motherhood is almost universal but fatherhood is rare. So what emerged along with the human person was the union of the biological mother and father to care for their child. Thus far nature, but then came culture, and the third surprise.

It seems that among hunter gatherers, pair bonding was the norm. Then came agriculture, and economic surplus, and cities and civilization, and for the first time sharp inequalities began to emerge between rich and poor, powerful and powerless. The great ziggurats of Mesopotamia and pyramids of ancient Egypt, with their broad base and narrow top, were monumental statements in stone of a hierarchical society in which the few had power over the many. And the most obvious expression of power among alpha males whether human or primate, is to dominate access to fertile women and thus maximize the handing on of your genes to the next generation. Hence polygamy, which exists in 95 per cent of mammal species and 75 per cent of cultures known to anthropology. Polygamy is the ultimate expression of inequality because it means that many males never get the chance to have a wife and child. And sexual envy has been,
throughout history, among animals as well as humans, a prime driver of violence. That is what makes the first chapter of Genesis so revolutionary with its statement that every human being, regardless of class, color, culture or creed, is in the image and likeness of God himself.