How the Berlin Wall Fell Thanks to Vatican II 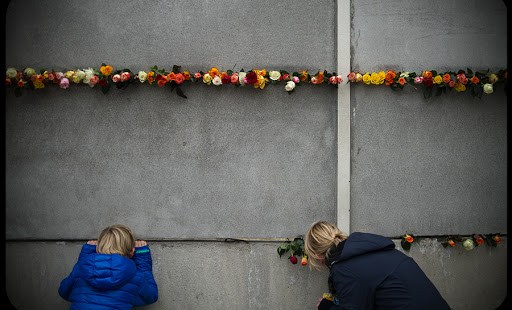 Fifty years after Lumen Gentium and 25 years after the Revolution of 1989, we can see more clearly that the Council had something to do with the communist crack-up.

History sometimes displays the happy capacity to arrange anniversaries so that one sheds light on another.

On Nov. 21, 1964, Pope Paul VI solemnly promulgated the Second Vatican Council’s Dogmatic Constitution on the Church, which began by proclaiming Christ the “light of the nations” and is thus known as Lumen Gentium. Twenty-five years later, on the night of Nov. 9-10, 1989, the Berlin Wall was breached and the communist project in Europe collapsed, reduced to rubble like the masonry that divided Germany for decades. Fifty years after Lumen Gentium and 25 years after the Revolution of 1989, we can see more clearly that the Council had something to do with the communist crack-up.

Not in the way senior Vatican diplomats imagined, however. In the post-Council euphoria, it was thought that Vatican II’s “openness” would help facilitate a “convergence” between East and West, such that the Wall, and the post-war division of Europe, would eventually melt away. What actually happened was far more dramatic, and illustrates the way in which salvation history, working inside what the world sees as “history,” can bend history in a more humane direction.

Lumen Gentium described the Church as having a sacramental character: the Church is “a sign or instrument … of communion with God and of unity among all men.” That longed-for “unity among all men” is only possible through “communion with God.” It can’t be created by ultramundane, hyper-secular modernity; as the great Council theologian, Henri de Lubac, once put it, human beings without God can only organize the world against each other. But whereas many in the West took the Council’s call for dialogue and openness as an invitation to modify the Catholic critique of communism, the Polish Church, led by two giants, Cardinal Stefan Wyszynski and the young archbishop of Cracow, Karol Wojtyla, read Lumen Gentium—and indeed the entirety of Vatican II—as an invitation to press hard for religious freedom and other basic human rights, so that the Church could be the unifying, liberating force that Polish communism manifestly could not be.

Wojtyla brought that conviction to Rome with him when he was elected pope in October 1978. Then, on his first pastoral pilgrimage back to his Polish homeland, John Paul II deftly wove together themes from Poland’s Christian history with Vatican II’s call for a re-energized Catholicism intent on converting the world, and in nine days inspired a revolution of conscience rooted in Christ, the light of the nations: Christ, from whom we learn the truth about the merciful Father and the truth about our humanity; Christ, who is the true liberator because he is, as John Paul styled his first encyclical, Redemptor Hominis, the “redeemer of man.”

John Paul II’s revolution of conscience ignited tinder that had been gathering in central and eastern Europe for years—and 10 years later, in November 1989, the Wall came down, demolished by the aroused consciences of men and women who had dared to take the risk of freedom, and who had dared to live in the truth.

Communism would eventually have collapsed of its own implausibility and incompetence. But it might not have collapsed in 1989 without John Paul II’s revolution of conscience. And John Paul’s papacy was made possible, in turn, by Vatican II: not by what Pope Benedict XVI called the “Council of the media,” which seemed to deconstruct Catholicism, but by the real Council, the Council that called the Church to proclaim Christ as “light of the nations” and to convert the world through all the instruments that form the Catholic symphony of truth.

What the world knows as “history” is really just the surface of things. Beneath that surface, salvation history — God’s liberating providence — is at work, often in hidden ways, but sometimes more clearly. There were two such moments of clarity, 50 and 25 years ago. We should recognize and celebrate them today.