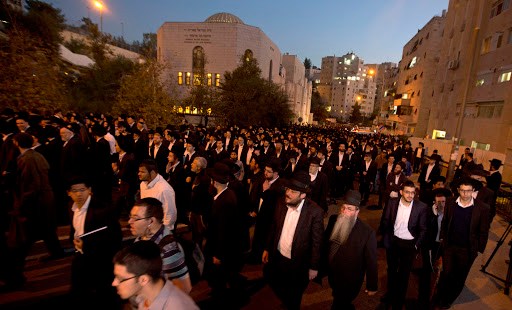 Patriarch Twal: No more violence in places of worship

Jerusalem — The leaders and representatives of the religious communities in the Holy Land went to visit the synagogue in Jerusalem, which yesterday was the scene of a bloody terrorist attack, to express solidarity with the affected community and condemn all together acts of violence that do not spare places of worship. The visit was attended by Christian, Muslim, Druze and Jewish leaders and representatives.

The Christian Churches were represented by Greek Orthodox Patriarch Thephilos III, while for the Muslims, the Mufti of Akko.

"Speeches repeated emphatically that no reason and no political intention can justify violence against people praying and attacks in places dedicated to prayer and silence," the Latin Patriarch of Jerusalem, His Beatitude Fouad Twal, who took part in the visit, told Fides. He recalled that all people of responsibility, politicians and religious leaders, must do their best to condemn this violence and avoid as much as possible the causes which lead other people to violence. The very act of gathering together in that place of sorrow, hit by violence, Patriarch Twal added, is a sign of hope. "It means that in Jerusalem the different religions share the will to live together in peace and mutual respect, and that conflict and violence cannot prevail and disfigure the face of the Holy City. In this spirit, we Christians prepare ourselves for Advent, hoping to be able to welcome pilgrims from all over the world."

According to Vatican Radio, Pope Francis made a heartfelt plea to Israelis and Palestinians to put an end to the violence which has plagued Jerusalem and other parts of the Holy Land in recent weeks. In remarks at the General Audience Wednesday, the Pope said, “I am following with concern the alarming increase in tension in Jerusalem and other parts of the Holy Land, with unacceptable episodes of violence that do not spare even the places of worship.  I assure a special prayer for all the victims of this dramatic situation and for those who suffer most as a result. From the bottom of my heart, I make an appeal to the parties involved to put an end to the spiral of hatred and violence and to make courageous decisions for reconciliation and peace. Building peace is difficult, but living without peace is a torment”.