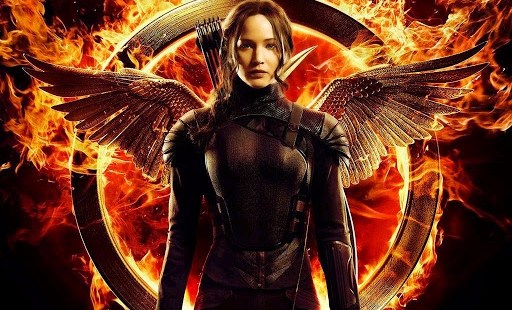 A bit of a speed bump, but the most mature film in the series yet.

Similar to the Harry Potter, Twilight, and Hobbit franchises the final story in the Hunger Games series has been unnecessarily divided into two parts for its film adaptation. And like the first parts of those other film stories, "The Hunger Games: Mockingjay—Part 1" feels a little stretched thin, a bit too threadbare, plot-wise, to warrant the division.

However. To their credit, the makers of "The Hunger Games: Mockingjay—Part 1" have actually made an effort to produce something more than just a cash grab.

The movie picks up with Katniss Everdeen (Jennifer Lawrence) freshly rescued from her second appearance in The Hunger Games and safely ensconced in the underground bunkers of District 13. If you’re not sure what any of that means because you skipped the first two movies in the series, tough. Everything that happens in “Mockingjay—Part 1” assumes you are intimately familiar with all the characters and invested in their story. If that doesn’t describe you, then large chunks of this film will be meaningless.

But who are we kidding? You’re alive and reading this so, of course, you’ve seen the first two Hunger Games movies. And because you’ve seen them, it should come as no surprise that while Katniss’ actions in “Catching Fire” have jump-started a rebellion against perfidious President Coriolanus Snow (Donald Sutherland), Katniss herself is interested only in rescuing the captured Peeta (Josh Hutcherson) and the other Game survivors.

Unfortunately, that’s not on the agenda of the leader of District 13, Alma Coin (Julianne Moore). With the help of Katniss’ secret allies from “Catching Fire,” media guru Plutarch Heavensbee (Phillip Seymour Hoffman) and public relations specialist Effie Trinket (Elizabeth Banks), Coin hopes to turn Katniss into a propaganda tool for the burgeoning revolution. To this end, Katniss is basically transformed into a superhero, complete with a costume (mask-less, thankfully), some trick arrows and a new codename, The Mockingjay. Accompanied by an ever present camera crew, The Mockingjay begins to sneak into the various districts, her appearances inspiring the downtrodden citizens to rise up against Snow and his corrupt regime.

At this point, the narrative starts to develop a kind of dual track. True to its origins as a Young Adult novel, half the story revolves around the teen angst surrounding the love (or is it?) triangle of Katniss, the imprisoned Peeta, and the hunky rebel, Gale (Liam Hemsworth). I’m not going to complain too much about these scenes because they probably work like gangbusters for the target audience. That being said, I’m kind of an old guy and not really part of the target audience, so they bored me.

What does work rather well in the film, and what most certainly had to be of most interest to Lawrence and the older actors in the film, are the parts of the movie dealing with the propaganda war between the Capital and the rebellion. Burdened with the task of splitting the story of Mockingjay into two parts, a move which effectively leaves most of the action for the next film, the filmmakers have decided to spend some time exploring how both sides in a conflict use propaganda to sway public opinion to their cause.

Generous on-screen time is spent with Katniss as she attempts to film PSAs on behalf of the rebellion, and with her documentarians as they try to show the rest of the country the devastation wrought by Snow’s forces. As for Snow, equal time is given to the Capital’s aired interviews with the seemingly well-treated Peeta, who pleads with Katniss and the rebels to lay down their weapons and settle things peacefully. Whether we’re meant to draw the conclusion that these tactics make the two sides in the conflict more similar than they would want to admit isn’t quite clear yet, so it will be interesting to see how all this plays out in "Mockingjay—Part 2." For the moment, it’s fascinating to see such themes played out in a genre primarily targeted at kids, who mostly zone out during their social studies classes (if current educational statistics are to be believed, anyway).

On the whole, "Mockingjay—Part 1” is a generally bleak affair full of suffering and misery. You can count on your fingers the number of times Lawrence isn’t moping or in tears. It also doesn’t help that Phillip Seymour Hoffman easily outclasses everybody in the few scenes he appears in, so all you can do is sit and ponder what a talent we’ve lost. You will not leave the theater feeling uplifted.

Is “Mockingjay—Part 1” a good movie? I guess it depends on how you look at it. As a continuation of the overall Hunger Games story arch, this is something of a speed bump, completely killing the momentum of the first two films. But as a standalone story set in The Hunger Games universe, it’s easily the most adult movie in the series, providing excellent performances from Lawrence and the older cast, and delving into issues not typically explored in the Young Adult genre. If that sounds fun for Thanksgiving, it’s definitely worth the watch.