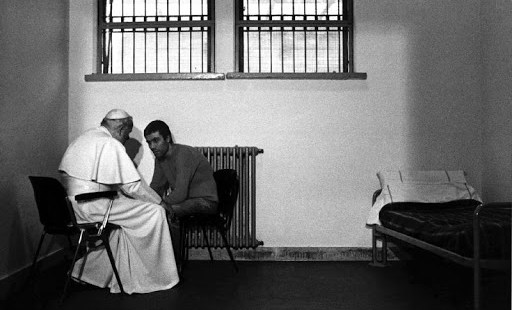 The man who once declared himself “Christ Eternal” but who tried to kill a pope now wants to meet with Pope Francis when he visits Turkey this week.

Mehmet Ali Ağca, the Turk who shot Pope John Paul II in 1981 has asked the Vatican for permission to meet Francis, according to Agence-France Presse, citing local Turkish media.

Pope Francis wil will visit President Recep Tayyip Erdogan and Prime Minister Ahmet Davutoglu when he lands in Ankara Friday. From there he travels to Istanbul to meet with Ecumenical Patriarch Bartholomew I, Archbishop of Constantinople.

In a statement published by Turkish media, Ağca requested a meeting with the Bishop of Rome as well.

“Pope Francis, who seeks to boost peace and brotherhood at a time the world is going through a political, economic and humanitarian crisis, is welcome to Turkey,” Ağca said. “I am Mehmet Ali Ağca and I would like to meet the Pope during this visit,” the statement said, accompanied by a photo of Pope John Paul II visiting Ağca in a Rome prison in 1983 to forgive his attacker.

Ağca’s motive for his shooting attack in St. Peter’s Square, which nearly took John Paul’s life, remains shrouded in mystery, with some observers speculating he was hired to carry out the will of the Kremlin. Moscow considered John Paul a threat to the Soviet program, even before he was elected Pope.

Ağca, 56, has changed his story several times, claiming alternatively that Cardinal Agostino Casaroli or Ayatollah Khomeini was behind the attack, or that it was part of a “divine plan” to demonstrate the miracle of the Pope’s survival.

The would-be assassin supposedly converted to Christianity in prison and has frequently claimed to be the Messiah,

Ağca served 19 years in an Italian prison for the attack on John Paul before being pardoned at the Pope’s behest in the Jubilee Year 2000. He was extradited to serve a sentence in Turkey for other crimes, including the 1979 murder of a newspaper editor.  In 2006, he was declared unfit for military service in Turkey because of a "severe anti-social personality disorder." After being released from an Ankara prison in 2010, he issued a statement declaring, "I proclaim the end of the world. All the world will be destroyed in this century. Every human being will die in this century … I am the Christ eternal."