Pope at Strasbourg: Build a Europe Which Revolves Around the Sacredness of the Human Person 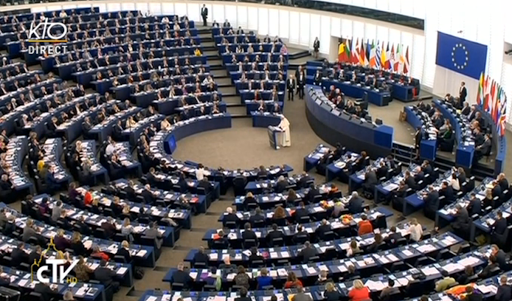 Under Francis, the Church intends to see itself once again unambiguously recognized as an influence.

Strasbourg sits peacefully in the Alsace region of France. Though the sleepy present belies a bellic past: Alsace has been the subject of wars throughout the centuries between France and Germany, changing hands between the two powers more than once.

It is no accident that the European Parliament’s seat is in Strasbourg, a sign of the hope in the Franco-German collaboration. And today, the town itself is a striking combination of the genius in bringing together the Romance and Teutonic influences.

Which is the perfect metaphor of today’s Address to the European Parliament by Pope Francis: Latin heart, German mind.

To say right at the outset, this is one of the best papal speeches I have ever read. Pretty much word-perfect in saying what needs saying.

The strongest influence on the text has to be that of the Pope’s himself: it has his inimitable and immediate style, which is recognizable throughout. Relevant. Pertinent. It’s masterfully balanced without being overly hedged.

There is clearly, however, in the depths of the text, also the influence of Pope Benedict, with more than a nod to themes raised at Subiaco, just before he became Pope (and throughout his papacy).

This papal address is a sort of exercise in compositing Benedict-through-Francis, if one may. The result is stunning: seamless continuity with Pope St. John Paul II and the Pope Emeritus. This is a speech that will still be talked about in 20 years. The Holy Father has laid down the blueprint for the next generation.

While this may be the shortest "overseas" papal visit in history, it could ironically have, minute for minute, the most enduring impact of any papal speech.

Astute Vatican watchers will no doubt also be interested to see that the Holy Father has dispensed with much of the "institutional" style of language favored over recent years by COMECE, the organization that officially represents the various Catholic Bishops’ Conferences to the European Union Institutions.

Admittedly, it was becoming difficult at times to see whether COMECE saw its role as representing the EU to the Catholic Church, rather than the other way round.  In any case, in taking control so directly of his own speech from what might have been expected in the line of the usual institutional platitudes, Francis has signaled one unmistakable fact that one would be negligent to ignore: even diplomatic exchanges must bow before the Evangelical imperative to always preach the Gospel:

“In addressing you today, I would like, as a pastor, to offer a message of hope and encouragement to all the citizens of Europe…It is a message of hope in the Lord, who turns evil into good and death into life.”

No doubt the powerful Cardinal Reinhard Marx, president of COMECE, will be studying closely this speech, to ensure that his colleagues don’t lose any time to "get on message."

I will need to prayerfully study and contemplate this address. However, one thing is immediately clear: under Pope Francis, the Catholic Church intends to see itself once again unambiguously recognized as a major influence in Europe; and through the Catholic Church, all Christians — who have in this speech a voice that speaks clearly and uncompromisingly in their name, too.

Benjamin Harnwell is the founder of the Rome-based Dignitatis Humanae Institute (Institute for Human Dignity), a think-tank founded in the European Parliament in 2008 whose goal is to protect and promote human dignity based on the anthropological truth that man is born in the image and likeness of God.  Its primary aim is to promote this vision of authentic human dignity mainly by helping Christians to be Christian in public life.