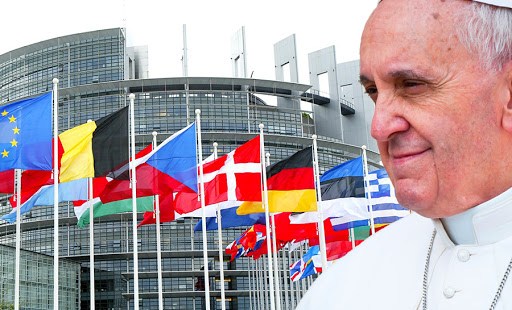 An unpopular European Union. A wildly popular Pope. A tendency to make secularist demands on Catholics and an aversion to making those same demands on religious minorities such as Muslims.

This is the setting Pope Francis will step into Tuesday when he flies to the French city of Strasbourg to deliver addresses to the European Parliament and the Council of Europe.

Benjamin Harnwell is the founder of the Rome-based

Dignitatis Humanae Institute (Institute for Human Dignity), a think-tank founded in the European Parliament in 2008 whose goal is to protect and promote human dignity based on the anthropological truth that man is born in the image and likeness of God.  Its primary aim is to promote this vision of authentic human dignity mainly by helping Christians to be Christian in public life.

On Monday, Harnwell discussed the threat of increasing secularist intolerance against Catholics who serve in the European Institutions, even at European Commissioner level. He also shared his thoughts on what the Pope might say in Strasbourg Tuesday.

Harnwell spoke to Aleteia in a personal capacity.

What is your background working in the European Parliament?

I worked for the senior British MEP Nirj Deva, for over 15 years (starting when he was an MP in the House of Commons), eventually serving as his Chief of Staff, based in the European Parliament.

I should say straight away that many others who have far greater experience working in the European Institutions, serving at higher levels than I did, have diametrically opposite opinions from mine on these things, so I don’t want to give any impression that what follows is typical of all Christians who work in Brussels.  I had one set of experiences, and drew certain conclusions from them.

What are the benefits of Pope Francis addressing the European Parliament?

Actually, it’s a little easier to see how a papal visit benefits the European Parliament, rather than to identify how it might benefit Pope Francis.

The EU is currently suffering record levels of unpopularity: the European elections earlier this year for example saw this discontent manifesting itself in unprecedented support to the traditionally "non-establishment" parties.  This centrifugal development was largely towards anti-austerity populism on the one hand, and to euro-sceptic dissatisfaction on the other.

Given this grim picture, the EU will not hesitate to maneuver itself into any potential updraft: and Pope Francis obviously has stratospheric popularity levels with a demographic that is far from insignificant: according to the EU’s own 2012 statistics, 72% of EU citizens are Christian and nearly half — 48% — are Catholic.  From the EU’s point of view, therefore, what could be more timely than a few dropped signals hinting that "to be a good Catholic one must be a good European?’

Those with longer memories, however, will think immediately of the rather cynical manipulation of Pope St. John Paul II, at the time of Poland’s EU accession referendum back in 2003, who was persuaded to put significant pressure on the Polish Church to lobby for a "yes" vote.  It’s broadly accepted that without the Church’s support, the government would have lost that referendum. Funnily enough, I don’t remember many of the EU’s professional secularists (all fervently pro-European) passionately arguing that the Church shouldn’t get involved with politics on that occasion.

JPII had been promised (according to well-placed friends involved at the time), a quid pro quo for his Euro-enthusiasm, the famous "God" clause in any future constitutional treaty.  One remembers the painful humiliation and disillusionment within the Vatican at how this promise melted like summer snow once the Church’s usefulness to the EU project was over.