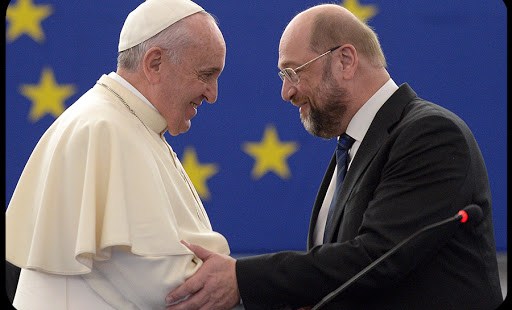 Pontiff suggests it is time to revive Europe’s Christian soul.

In a speech that echoed with the thoughts and words of Popes John Paul II and Benedict XVI, Pope Francis yesterday issued a call to arms, challenging the European Union to rouse itself out of its torpor and give force to the ideals that drove the founders of the European movement.

Pope Francis began by pointing out how much has changed since Pope John Paul II addressed the European Parliament in 1988, when the Iron Curtain still divided Europe.  Despite the Cold War being long over, and the EU being well on the way to being a truly pan-European institution, “Europe seems to give the impression of being somewhat elderly and haggard,” said the Pope, “feeling less and less a protagonist in a world which frequently regards it with aloofness, mistrust and even, at times, suspicion.”

Nonetheless, he said, he had a message of hope and encouragement, calling on today’s European leaders “to return to the firm conviction of the founders of the European Union, who envisioned a future based on the capacity to work together in bridging divisions and in fostering peace and fellowship between all the peoples of this continent.“

That pragmatic and piecemeal approach has paid dividends, with Papal Knight John Hume declaring in his 1998 Nobel Prize acceptance speech, that “European union is the best example in the history of the world of conflict resolution and it is the duty of everyone, particularly those who live in areas of conflict, to study how it was done and to apply its principles to their own conflict resolution.”

Rather than stressing Europe’s peace-making methods in this speech, however — he left that for a later speech at the Council of Europe — Pope Francis turned instead to what he saw as the deeper source of post-war European integration.

“At the heart of this ambitious political project ,” he said, “was confidence in man, not so much as a citizen or an economic agent, but in man, in men and women as persons endowed with transcendent dignity.”

Describing dignity as “the pivotal concept in the process of rebuilding which followed the Second World War,” Pope Francis called “praiseworthy” the European determination to advance the cause of human dignity through the promotion of human rights. “There are still too many situations,” he said, “in which human beings are treated as objects whose conception, configuration and utility can be programmed, and who can then be discarded when no longer useful, due to weakness, illness or old age.”

Asking what dignity there can be when people lack freedom of conscience and religion, when the rule of law is absent, when discrimination is rife, and when people are deprived of food, of shelter, and of work, Pope Francis pointed out that our “inalienable rights” can never justly be taken away. We go astray, however, if we broaden the concept of rights while forgetting the “essential and complementary concept of duty,” as though our lives as individuals can be lived “without regard for the fact that each human being is part of a social context wherein his or her rights and duties are bound up with those of others and with the common good of society itself.”

Calling for human beings to be regarded not as discrete absolutes but as “beings in relation,” he described as a scourge of modern Europe the loneliness of those who lack connections with others, whether they be the abandoned elderly, the alienated young, immigrants, and the poor. This loneliness stands juxtaposed to “certain rather selfish lifestyles, marked by an opulence which is no longer sustainable and frequently indifferent to the world around us, and especially to the poorest of the poor.“

Describing as “the inevitable consequence of a ‘throwaway culture’ and an uncontrolled consumerism,” a tendency to confuse ends and means such that technical and economic questions dominate political debate, “to the detriment of genuine concern for human beings,” he warned against the reduction of human beings to “mere cogs in a machine.” When people are treated as things, lives can be discarded with few qualms when they no longer seem useful, “as in the case of the terminally ill, the elderly who are abandoned and uncared for, and children who are killed in the womb.”

Faced with the challenge of tending to the disparate needs of individuals and peoples, Pope Francis said Europe’s parliamentarians were “called to a great mission which may at times seem an impossible one.” Nonetheless, he said, hope in the future could be restored, starting with the young, leading to “a rediscovery of that confidence needed to pursue the great ideal of a united and peaceful Europe, a Europe which is creative and resourceful, respectful of rights and conscious of its duties.”

Citing how Raphael’s Vatican fresco “The School of Athens” depicts Plato pointing to the heavens while Aristotle’s hand is directed towards the world, he said Europe’s history had been made up of an “interplay between heaven and earth,” with Europe’s people being open to the transcendent while having a concrete, pragmatic capacity to confront problems.