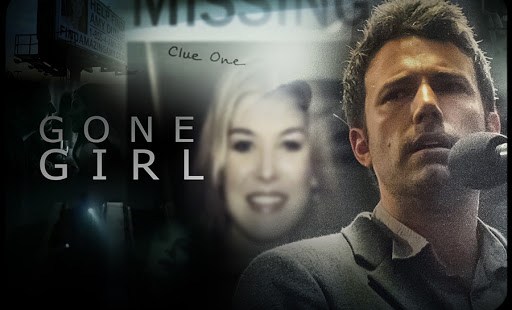 If you happen to know a couple who are planning to get married and they’ve expressed some concerns about going through pre-marital counseling as recommended by the Church, then just have them go see “Gone Girl.” I guarantee that if they do so, they’ll be on the phone with Father first thing the next morning to set up their sessions.

“Gone Girl” is the tenth feature film from director David Fincher, the man who brought us the likes of “Seven,” “Fight Club,” “The Social Network,” and “Zodiac.” Whether you like those films or not, you’ve got to admit that’s a pretty solid resume. And if those uber-stylish movies weren’t enough to earn Fincher the title of auteur, this one certainly clinches the deal. “Gone Girl” is as Fincher-y as a movie can possibly get.

It’s darkly lit with a limited pallette. Characters are often half hidden in the shadows. There are editing flourishes that always remind you the director cut his teeth on music videos. The subject matter is somber and serious, but not above wallowing in some of the trashier elements of pulp fiction (there’s graphic sex and violence, but not as much as in some of Fincher’s other works). But most of all, the protagonists are recognizable all-American archetypes, yet also a bit obsessive and/or deviant, so you’re never 100 percent sure you should be on their side.

In the case of “Gone Girl,” the possible choice of protagonists are Nick Dunne (Ben Affleck) and/or his wife Amy (Rosamund Pike). Now, if that sounds like I’m being sort of wishy-washy on exactly who the “hero” of the film is, it’s because there may not actually be one. But we’ll get to that.

The movie opens on the day of the couple’s fifth wedding anniversary as Nick returns home to find the living room in shambles and Amy missing. He immediately summons the police, who determine that foul play was involved. Because Amy is semi-famous, having served as the model for the title character in a wildly popular line of children’s books published by her parents, her disappearance swiftly becomes a cause célèbre with the national news channels. As a result, an uncomfortable Nick finds himself the unwilling star in the ensuing media circus.

He also becomes the prime suspect in Amy’s disappearance and likely murder. As flashbacks reveal, the couple’s marriage had been in trouble for some time. Both Nick and Amy lost their jobs due to the recession, and most of Amy’s trust fund was turned over to her parents to help with their financial woes. On top of the Dunne’s money problems, Nick had forced a reluctant Amy to move from her beloved New York City to suburban Missouri in order to attend to Nick’s dying mother. Once in Missouri, Nick had become distant, lazy, and possibly abusive.

And that’s about as far into the plot as I’m willing to go, because to say too much more would spoil things for those who have never read Gillian Flynn’s wildly popular novel upon which “Gone Girl” is based. What starts out as a routine setup for any old Lifetime movie of the week quickly turns into a roller coaster of a mystery once the plot twists start coming. And there are a lot of them, some predictable, but enough unexpected to keep viewers guessing up until the very end about just who is really guilty, and of what.

If it were nothing more than a mystery movie, “Gone Girl” would be an entertaining enough outing, though perhaps a confusing one in trying to determine what motivates certain characters. But as my earlier mentioning of pre-marriage counseling indicates, Fincher and Flynn, who also adapted her book to the screen, have a lot more on their mind with “Gone Girl” than just a simple whodunnit.