Patriarch Bartholomew: Christians Already “United by the Blood of Martyrdom” 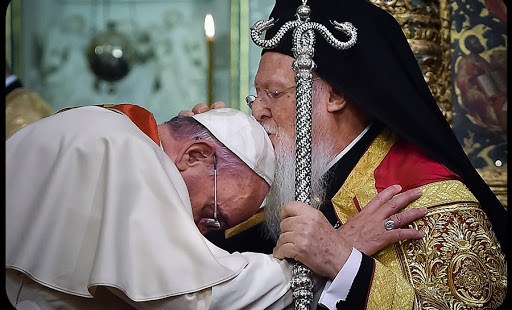 Francis declares that full communion will not involve “any conditions except that of the shared profession of faith.”

With much of the world watching for signs that Pope Francis’ visit to Istanbul signals real progress toward the achievement of full Communion between the Eastern and Western Churches, Bartholomew I, Ecumenical Patriarch of Constantinople, had jarring news: Christians are already united, in persecution and death.
“We no longer have the luxury of isolated action. The modern persecutors of Christians do not ask which Church their victims belong to,” said the Patriarch. “The unity that concerns us is regrettably already occurring in certain regions of the world through the blood of martyrdom.”
Bartholomew spoke after celebrating Divine Liturgy at the Patriarchal Church of St. George in Istanbul, with Francis as his guest.

The celebration, marking the Feast Day of St. Andrew, patron of the Orthodox Patriarchate of Constantinople, is the final event in the Pope’s three-day visit to Turkey. The trip’s other highlights include the Pontiff’s address to Turkish leaders in Ankara, his tours of the Hagia Sophia museum and Blue Mosque, and his celebration of Mass at Holy Spirit Cathedral, Istanbul’s second-largest Catholic church.
Martyrdom and unity are familiar themes for Bartholomew and Francis, who met this past May in Jerusalem to pray together at the Holy Sepulcher. On that occasion, the Pope spoke of “an ecumenism of suffering, an ecumenism of blood.” The Patriarch said that Christ’s tomb should teach Christians to “love the other, the different other, the followers of other faiths and other confessions.”
Today, the Pope and the Patriarch reiterated those points in a joint declaration, pledging “to intensify our efforts to promote the full unity of all Christians, and above all between Catholics and Orthodox,” and expressing “our common concern for the current situation in Iraq, Syria and the whole Middle East.”
“We cannot resign ourselves,” the statement continues, “to a Middle East without Christians.”
Over the past decade, since the US-led coalition toppled Saddam Hussein’s Ba’athist dictatorship, a succession of Islamic extremist groups has subjected Iraq’s Christian minority to a terror campaign whose tactics have ranged from church-bombing to summary execution. From the extremists’ point of view, the terror has proven highly effective. By 2013, reports "The Economist," two-thirds of Iraq’s 1.5 million Christians had left the country, to save their lives.
In Syria, torn by civil war since 2011, Christians have also reported threats and atrocities — some coming from Sunni insurgent groups fighting Bashar al-Assad’s regime, others from the regime itself.
The Institute for Human Rights, based in Germany, reports that 80 percent of all acts of religious intolerance are aimed at Christians. Europe’s Organization for Security and Cooperation estimates that 200 million Christians worldwide now face discrimination, harassment, threats, and violent persecution.
“And, tragically,” says the joint declaration, “all this is met by the indifference of many.”
On the subject of solidarity through misfortune, Francis and Bartholomew struck a recurring, and comparatively hopeful, note. “Just as the blood of the martyrs was a seed of strength and fertility for the Church, so too the sharing of daily sufferings can become an effective instrument of unity.”
This is the second joint declaration issued by these two Church leaders over the past six months. After praying together in the Holy Land, the Pope and the Patriarch stated formally, “We look forward in eager anticipation to the day in which we will finally partake together in the Eucharistic banquet.”
Francis and Bartholomew have also announced plans for a meeting to be held in the year 2025 — which would be most likely between their successors. The projected date represents the 1700
th anniversary of the Council of Nicaea; the projected setting is Nicaea itself
— actually, Iznik, the quaint Turkish provincial town built on its ruins.
Partly in the hope of setting a coherent agenda for talks with Rome, the Patriarch has called a pan-Orthodox Synod for 2016. In "Catholic World Report," Father Cyril Hovorun, a Ukrainian Orthodox expert in ecumenism, cites “pressing, divisive issues” relating to Church governance, and grimly concludes, “Simply put, the inter-Orthodox peace is fragile.”
Apparently with these concerns in mind, Pope Francis answered the Patriarch’s speech with one of his own, affirming that full communion “does not signify the submission of one [Church] to the other, or assimilation.”
The Pontiff continued: “I want to assure each one of you here that, to reach the desired goal of full unity, the Catholic Church does not intend to impose any conditions except that of the shared profession of faith.”
Going on to praise the members of the mixed Protestant-Catholic community of Taizé, France, for being “able to embrace what is essential and what already unites us,” the Pope concluded, “We are already on the way towards full communion and already we can experience eloquent signs of an authentic, albeit incomplete union.”
After Francis’ plane departed Istanbul, Vatican spokesman Father Federico Lombardi told Vatican Radio, “I think [Francis and Bartholomew] are trying to force the resistances’ that be, and also to encourage the progress of reflection and theological studies. … In this sense there is a very important impulse driven forward by these two men.”