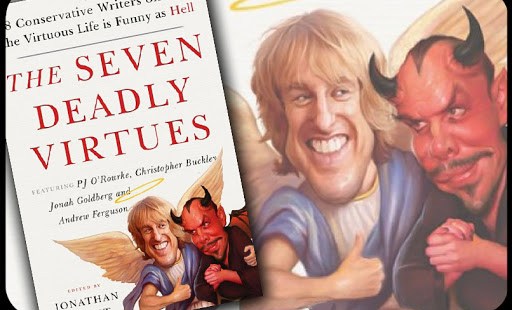 Avid readers will want to find these under their Christmas tree.

That “there is no end to the making of books” is attested by both revelation (see Ecclesiastes 12:12) and a browse through your local bookstore—which, if well-stocked, will help you get the following to deserving readers on your Christmas list.

N.T. Wright, “Paul: In Fresh Perspective” (Fortress Press). The former Anglican bishop of Durham is the Anglosphere’s premier biblical scholar and to read his books is to feel oneself in the hands of a master-teacher. This small volume is a distillation of the analysis in Wright’s massive, two-volume study, “Paul and the Faithfulness of God” (the fourth installment in his masterwork, “Christian Origins and the Question of God”). It’s a great read for both information and inspiration, and ought to be a considerable boon to preachers.

Jonathan Last, editor, “The Seven Deadly Virtues” (Templeton Press). The title comes from a naughty song in “Camelot,” but in the hands of Last and his colleagues (all prominent conservative writers), the content is not a celebration of vice but a witty introduction to the virtuous life, crafted especially for denizens of a culture deeply confused about right and wrong—and about the reasons why doing the right thing makes for happiness. Give it to a regular reader of the National Catholic Reporter, The Nation or some other publication convinced that conservatives are dour, cranky meanies—but get one for your favorite college student, too. The culture wars were never so much fun.

Roger Scruton, “Notes from Underground” (Beaufort Books). The distinguished British philosopher who (as he puts it on the dusk jacket) “rescued himself from the academy twenty years ago,” adds to his literary laurels with an evocative novel of life in Prague during the last years of communism. The moral wilderness of mirrors in a police state, against which Vaclav Havel and John Paul II counterposed “living in the truth,” is dissected with insight and compassion. And while Scruton reminds us of just how bad life was inside the communist culture of the lie, he also explores, in an artful way that never descends to vulgarity, the passions that could be summoned up by that experience. The portrait of a clueless American legal philosopher who insists to hard-pressed Czech dissidents that abortion is the first of human rights is devastatingly delicious.

Fred Kaplan, “John Quincy Adams: American Visionary” (Harper). If he’s remembered at all these days, it’s as portrayed by Anthony Hopkins in the film “Amistad;” but John Quincy Adams was arguably the most talented and consequential public servant in American history. He served in both the Senate and the House of Representatives, represented the United States diplomatically as ambassador to the Netherlands, Prussia, Russia and Great Britain, negotiated the Treaty of Ghent (which ended the War of 1812), and served as President James Monroe’s secretary of state before winning the presidency himself. Adams spoke multiple languages, taught at Harvard, was a competent poet and assiduous diarist, and was happily married to Louisa Catherine Johnson for 51 years. It’s hard to imagine such a man in the sound-bite politics of today, but it’s good to be remembered of the kind of people America once nurtured, in the hope that remembering might inspire us to do so again.

Allen C. Guelzo, “Gettysburg: The Last Invasion” (Vintage Books). There is certainly no end to the making of books about the three most decisive days in American history. But having read my share of them, I learned a lot from this latest entry into the lists, particularly in terms of the logistical concerns behind Robert E. Lee’s two invasions of the North, and the human character of the combatants. Guelzo has mined the materials of the new social history in service to a fine piece of good old-fashioned narrative history.

Evelyn Waugh, “Scoop” (Back Bay Books). I first read it in high school; I re-read it for perhaps the 20th time a few months ago. No novel I know is so consistently entertaining. Give it to someone condemned to a long flight in the middle seat.