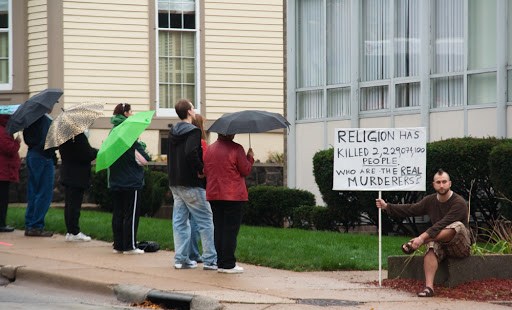 Plaintiffs are pressing for their right to engage in one-on-one conversations and distribute literature.

A federal judge heard arguments this week over a Pittsburgh ordinance that prohibits pro-life activists from talking to women outside abortion facilities.

Bowman told Aleteia that the plaintiffs challenging the Pittsburgh ordinance in federal court are pressing for their First Amendment rights to engage in one-on-one conversations and distribute literature on public sidewalks.

"The hope is that what the court will eventually determine, and perhaps the city will realize and simply settle on the premise that one-on-one conversation should not be banned on any public sidewalk," Bowman said.

On Wednesday, U.S. District Court Judge Cathy Bissoon heard more than three arguments and testimony over the ordinance, which the Pittsburgh City Council created in 2005. Lawyers for the city argued that the law is designed to prevent angry confrontations between pro-life activists, women seeking abortions and clinic employees.

Under the ordinance, no one may “knowingly congregate, patrol, picket or demonstrate in a zone extending 15 feet from any entrance to the hospital or health care facility.” Health care facilities are broadly defined as establishments "providing therapeutic, preventative, corrective, healing and health-building treatment services on an out-patient basis by physicians, dentists and other practitioners.”

A federal appeals court modified an earlier version of the law by striking down an 8-foot "floating bubble zone" that prevented sidewalk counselors from getting close enough to hand out leaflets.

"No law should even allow a city to ban speech on public sidewalks just because there’s an eye doctor there or a chiropractor. A city shouldn’t be able to target pro-life people by giving itself discretion to decide where speech can be banned," Bowman said.

Nikki Bruni, the lead plaintiff challenging the Pittsburgh law, testified Wednesday that the law makes it difficult for her to have a quiet conversation with someone outside the abortion facilities. Once someone enters the buffer zone, Brunni said she has to stand back and raise her voice to be heard over the downtown traffic.

"It’s just not a good way to have a conversation with someone, especially about something that sensitive," Bruni said, according to published reports.

Bruni’s experience is similar to what pro-life activists in Boston dealt with after Massachusetts passed a 2007 law that created a 35-foot buffer zone that prohibited pro-life advocates from speaking with individuals entering an abortion facility. The U.S. Supreme Court heard arguments in McCullen v. Coakley last year. In June, the Supreme Court struck down the law for imposing "serious burdens" on the plaintiffs’ First Amendment rights of free speech.

Bowman said Alliance Defending Freedom attorneys argued before Judge Bissoon that the Supreme Court’s ruling prohibits Pittsburgh’s buffer zone law. He said the judge asked the city’s attorneys if Pittsburgh was willing to allow one-on-one conversations inside the buffer zone, even if crowds or other activities were still prohibited.

"The city was unable to allow even that simple quiet speech," Bowman said. "The judge asked the city to reconsider, and gave it two more weeks."

If city attorneys and the Alliance Defending Freedom cannot reach an agreement on sidewalk conversations outside abortion facilities, then attorneys on both sides will file additional legal briefs on Jan. 20 suggesting how the judge should decide the case.