Who is Pope Francis for the Average Turk? 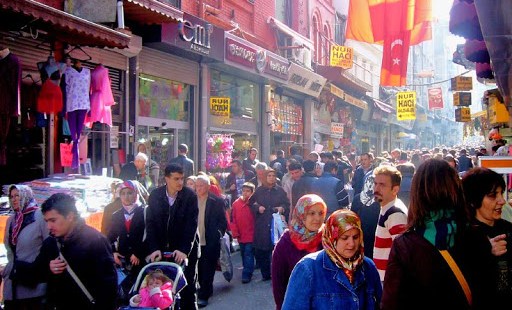 The photo ops were great, but the country would rather not have Christians in its midst.

Last week, I asked one of my EFL classes whether they’d heard about Pope Francis’ upcoming visit to Turkey, and, if so, what they thought of it.  I do not know what answers I expected, but here is the answer I got:
“Pope Francis?  What is it?”
This particular young man being one of the class heavyweights — a grad student at the local university’s philosophy department — I was sure he was joking.  But he looked as confused as I felt.
“Not it,” I said,
“he.”  Pope Francis is a person.”
“Is he famous?”  Asked another student.  “Yes,” piped up another.  “What countries is he famous in?”
With all anxious eyes on the flat screen wall monitor jacked into my laptop, I Googled Francis.  His world-famous mug brought a grunt of recognition.  “Oh,” my students said.  “You mean
Papa Franjis.”  The Turkish c is pronounced like our j.  But then the conversation stalled.  Nobody had anything to say.
When Pope Francis visited Turkey last weekend, it was like he was visiting a ghost town.  The Christian presence in the country is vestigial – down to 120,000, about one-tenth the size of the Archdiocese of Los Angeles  Holy Spirit Cathedral, where the pope celebrated Mass, is said to be the second-largest Catholic church in Istanbul after St. Anthony of Padua in
Beyoğlu.  With its red brick neo-Gothic façade and its intricate rose window, St. Anthony is a treat for the eyes, but it could fit easily into Phoenix’s St. Mary’s Basilica.
According to a 2011 Pew survey, only 6% of Turks reported having a favorable opinion of Christians — a percentage far lower than that of Christian-friendly Egyptians (48%), Jordanians (52%), or even Pakistanis (16%).  Yet, in the same poll, a smaller percentage of Turks reported having a favorable opinion of Muslims than the citizens of any other Muslim-majority nation.  The Turkish regard for Muslims is markedly lower than any European nation’s regard for Christians.  The roots of anti-Christian animus in Turkey may extend deep into Islamic, Ottoman soil, but they take considerable nourishment from the modern Turkish concept of nationhood.
İstiklâl, the name of the swank
Beyoğlu street where St. Anthony’s stands
, is the Turkish word for Independence.  It’s also the name Turks give to the war fought between their National Movement, led by the future Ataturk, and the foreign, mainly Christian,  nations who had claimed shares of Turkish territory following the Ottoman defeat in the First World War.  Both Turkish and Greek armies brutalized civilians perceived as loyal, by virtue of their religion, to the other side; many atrocities showed exquisite care and planning.  But in the Turkish case brutality came with success.
Lasting peace required total segregation. A convention signed in 1923 by the new and victorious Republic of Turkey and the defeated Kingdom of Greece stipulated a massive population transfer.  It sent half million Muslims off to Turkey and more than one million Greek Orthodox Christians off to Greece.  Meanwhile, the Republic of Armenia, having come into its brief existence only after the massacres of the First World War, renounced its claims on Turkish territory, collapsing shortly afterward under a Soviet avalanche.
For modern Turkey, independence meant becoming Christian-free.
Hosting Pope Francis may have been the Turkish government’s boldest recent step toward improving its relations with Christians worldwide — or at any rate, toward improving the country’s image — but it isn’t the first.  In 2011, Recep Tayyip Erdogan — then Turkey’s prime minister, now its president — announced plans to return properties confiscated from Christian groups since a 1936 census, and to compensate those groups for those properties that had been sold off.
In the same year, Ertuğrul Günay, Turkey’s culture minister, announced that his ministry had come to recognize the Christian pilgrimage as “a special field of tourism and as a special cultural wealth.”  His impression was swiftly confirmed by Christian interest in the 4
th-century church discovered at Laodicea.  It soon began drawing 1,000 daily visitors – more than 90%, estimates Celal Simsek, senior archaeologist at the dig, are pilgrims.