Happy Holidays from the Satanic Temple! 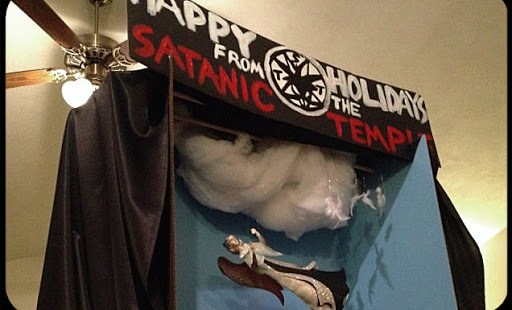 The battleground in the War on Christmas may be closer than you think.

‘Tis the season for the Catholic blogosphere to go ballistic over the War on Christmas – the bus ads from the American Humanists, American Atheists, the Freedom from Religionists et al. and public displays with Christmas themes marred by ludicrous “Festivus poles” and tasteless representations of the “Pastafarian’s Flying Spaghetti Monster.” Then there are the 42 gazillion (I counted) ads on TV, the Internet and in my physical mailbox trading on the birth of Jesus for commercial gain.

The latest outrage is a crude display of an angel falling from the sky into cardboard “flames,” accompanied by Bible verses and the message “Happy Holidays from the Satanic Temple” which has now received “permission” from Florida officials to be erected inside Florida’s Capitol building December 22 through 29. All it took was the threat of a lawsuit from Rev. Barry Lynn of Americans United [for Separation of Church and State]. It was reported that “the Satanic Temple describes itself an ‘organized religion’ with a mission to ‘encourage benevolence and empathy among all people.’”

How a depiction of Lucifer falling into the fires of Hell achieves their mission of benevolence and empathy is anyone’s guess.

Initially, I planned on joining the chorus of outrage and edifying readers with a discussion of how the ACLU (on purpose) and the Supreme Court (inadvertently) has caused the ridiculous situation we face today where, for every creche, menorah and Santa’s toy shop display, one has to avert his eyes from the sheer ugliness and mean-spiritedness of graphic statements from pseudo-religions that do not seek to share in the holiday cheer as much as they want to stick a fork in it. Readers will be relieved to have been spared the legal history from Lemon v. Kurtzman (1971) and Lynch v. Donnelly (1984) to the present day because others have covered this admirably. You’re welcome.

And only two weeks ago, I mildly defended the commercialism of Christmas (gift giving is at least motivated by love, generosity and family bonds) when I warned a regular contributor against sounding like a Christmas curmudgeon for having pointed out quite reasonably that we’ve wiped Advent off the calendar and have all but forgotten the “Reason for the season.”

But since then I’ve slipped into a Grinchy mood over the way so many Americans celebrate Advent and Christmas.

One catalyst was the transformation of my suburban Florida neighborhood that takes place annually on the Saturday after Thanksgiving (Thanksgiving Friday being a Solemnity commemorating merchants and their seasonal bargains). By Saturday night, every second lawn was populated with inflatable figures of Santa Claus, snowmen, elves and the like. The Catholic family across the street has a larger-than-average herd (pack? troop?) of inflatable characters that includes Hello Kitty® and a bemused-looking snowman on whom an inflatable puppy is supposedly p**ing, hence his odd “facial” expression. Because nothing says the birth of our Savior quite like a puppy p**ing on a snowman, right?

By day, however, the neighborhood looks like a killing field – all the cheery figures splayed face down in the grass, apparently massacred, but in reality only “deflated” in pre-dawn hours before I step out with Toby, our Brittany spaniel, for his morning walk. He doesn’t seem to care about the carnage, but it’s getting to me.

Another catalyst was watching Rick Steve’s “Christmas in Europe” on PBS.

Some folks I know have been a little smug about Americans’ religiosity compared to that of Europe. It’s common knowledge that religious belief and observance is tragically low over there: Fewer than one-quarter of Italian, German and Spanish adults, and only 13 percent of the French, say that “