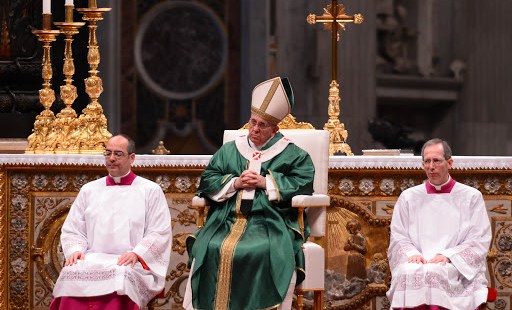 Argentine newspaper asks Pontiff to explain his views on divorce and remarriage.

Pope Francis is not likely to open up Communion to divorced and civilly-remarried Catholics, according to an article in an Argentine newspaper, but he said bishops must consider ways to help “a family that has a homosexual son or daughter…(and consider) how can they raise him or her.”

The latest interview with the Pope also revealed more background on how Cardinal Raymond Burke left the Vatican curia to become patron of the Sovereign Military Order of Malta.

The Pope sat down with veteran Rome writer Elisabetta Piqué of the Argentinian daily La Nacion for an interview that covered Catholicism in Latin America, reform of the curia, Argentine politics and plans for his 78th birthday on December 17. The interview took place Thursday at the Pope’s residence in Casa Santa Marta.

He also said he would visit three countries in Latin America in 2015, but declined to name them.

The article noted that the Pope appeared healthy and “laid back” during the 50-minute interview, in spite of a heavy schedule, and that he “did not dodge any sensitive issue.”

Much of the interview focused on the Synod of Bishops’ gathering this fall to discuss problems related to marriage and the family. Media attention to the synod suggested that the Church may eventually change its teaching that Catholics who have remarried after divorce without getting an official Church declaration that the original marriage is null (an annulment) may not be admitted to Communion.

In the new interview, however, Francis said that such Catholics are “excommunicated in fact,” according to an English translation, by Vivien Pérez Moran.

This General Assembly allowed in-house divisions to surface
—differences in opinion about how to face certain challenges, such as the issue of Catholics who have divorced and remarried, who the Pope defined as "excommunicated in fact." "The German Cardinal Walter Kasper said we should look for hypothesis, that is, he paved the way. And some people got frightened," he explained.

To reassure those who think the synod created confusion, the Pope insisted that the synod "is a process" and that "the doctrine of the Church on marriage was not addressed at all." "I am not afraid of walking the synod road (synod comes from the Greek "syn," "odos" walk together) because that is the path that God expects us to walk. Indeed, the Pope is the ultimate guarantor," he said.

Still, the Church should “open the doors a little bit more," he said, suggesting, "Why can’t they be godparents?”Piqué asked him about the fears of “a conservative sector in the US” that thinks Francis removed Cardinal Burke as head of the Supreme Tribunal of the Apostolic Signatura because of his outspokenness in criticizing Cardinal Kasper’s proposals. Francis explained that Cardinal Burke’s move had been planned way ahead of time.

One day, Cardinal Burke asked me what he would be doing as he had still not been confirmed in his position, in the legal sector, but rather had been confirmed "donec alitur provideatur." And I answered, "Give me some time because we are thinking of a legal restructuring of the G9." I told him nothing had been done about it yet and that it was being considered. After that the issue of the Order of Malta cropped up and we needed a smart American who would know how to get around and I thought of him for that position. I suggested this to him long before the synod. I said to him "This will take place after the synod because I want you to participate in the synod as Dicastery Head." As the chaplain of Malta he wouldn´t have been able to be present. He thanked me in very good terms and accepted my offer, I even think he liked it. Because he is a man that gets around a lot; he does a lot of travelling and would surely be busy there. It is therefore not true that I removed him because of how he had behaved in the synod.

If this was a misunderstanding of Pope Francis’ intentions, he said there are others, including his birthday lunch last year with homeless people in Rome—referred to in Italian as barboni. Piqué asked if he planned to celebrate with the homeless once again as he did last year.